Mumbai (The Hindu): A day after the Union government allowed cash withdrawals of up to Rs. 50,000 per week for current account holders, the Agricultural Produce Market Committee (APMC) in Vashi continued to wear the now-familiar look of inactivity.

Kailash Tajne, president, APMC Vegetable Market, said the new withdrawal limit does not help traders like him. “This decision on withdrawal does not make any major difference to us. Rs. 50,000 a week means hardly Rs. 7,000 per day. What can we do with that? If the withdrawal amount would have been Rs. 5 lakh, it would have brought some relief to us. Moreover, the main issue in our business is the customers don’t have money to pay us so until and unless the common man does not have enough to spend on the vegetables like they used to, our trade will continue to suffer.” 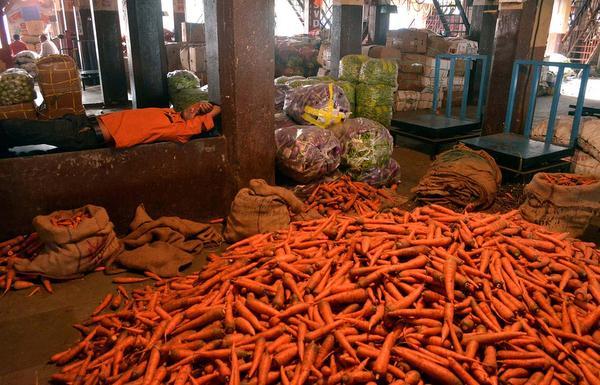 The APMC market, which usually sees 571 truckloads of vegetables arriving every morning, now sees only around 471 trucks. Fifty per cent of the produce has no takers. Narendra Shelke, a trader at the market, said the cost of transporting produce to the market has to be paid in cash every day.

He said, “It costs Rs. 15,000 for a truck to bring produce from Nashik. If the produce is coming from Uttar Pradesh, the truck charge goes up to Rs. 50,000. This amount has to be paid in cash after the vegetables are unloaded. How can a withdrawal limit of Rs. 50,000 per week be of any help in this situation? Our customers continue to pay with demonetised currency. Even if we accept the notes, how can one stand in long queues to deposit them, leaving all other work? And when we deposit [cash in the bank], we will be questioned on why we accepted these notes after they were banned.”

Mr. Shelke added that it’s not just business that is being affected, production will be hit very soon as well. “Due to climatic changes, vegetables that would be harvested in eight days are being harvested in three days. Since there is no money to pay the daily-wage farm labour, workers don’t turn up at farms. Because of this, harvesting is getting delayed and vegetables are rotting. The Nashik APMC market is shut since three days, and farmers are turning to us to sell their produce. We don’t have enough customers to sell the vegetables to. It’s a vicious circle that has paralysed both production and business.”

Vegetable rates have gone down between Rs. 3 to Rs. 6 per kg at Vashi APMC after demonetisation. Every day, tonnes of vegetables are being thrown as there are no takers, and traders are hoping the government finds a solution to the situation.