Mumbai (The Hindu): A series of recent incidents involving desecration of Christian religious structures and sites has the community on edge, but its leaders are working overtime to keep out communal overtones. 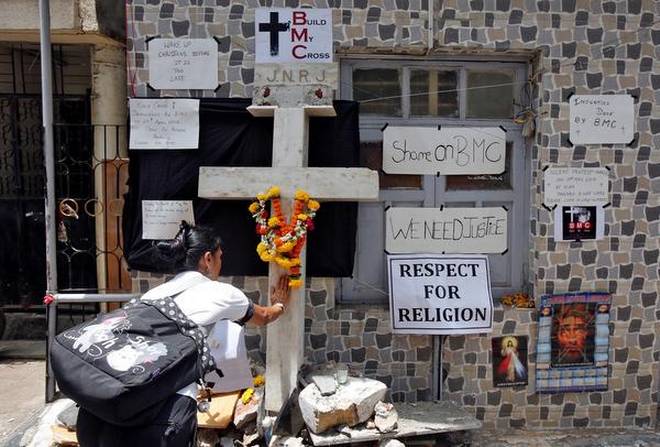 On April 29, the razing of a Holy Cross dating back to 1895 on Bazaar Road, Bandra by the BMC led to angry protests, with community members insisting that a Holy Cross can hardly be a hindrance to a development project. On May 3, a crucifix in Kalina was desecrated by an inebriated man, who was arrested. On Saturday, the glass case of a statue of Mother Mary, installed on private land in Kashimira, was broken in an suspected robbery attempt.

These back-to-back incidents, though unrelated, have led to intense discussions within the community, and the common feeling is their issues are being neglected by the authorities. “The mood in the community is sombre. It suddenly feels like no one wants to sit down and think of a solution so that these attacks stop. The Holy Crosses and statues have religious sentiments attached to them. It is painful for us to see them desecrated,” says Melwyn Fernandes, a Thane resident.

According to him, there have been at least seven such incidents over the past year including the desecration of two statues of Mother Mary in Kurla’s Christian village. The incident led to tension in the area and needed a heavy deployment of police personnel to avoid untoward incidents. “The government has to step in and come up with a solution to secure religious structures. Arrests aren’t enough.”

Father Nigel Barrett, spokesperson, Archdiocese of Bombay, says the incidents are unrelated and are not being seen as attacks on the community or having religious overtones. “Police have been quick in taking action. The motive in one case was robbery, while the BMC’s demolition is a clear legal issue. There have been actions on other religious structures too.”

The BMC demolition in Bandra, though, is a sore point. “People are comparing [the demolition] with other illegalities in Bandra, be it hawkers or structures, towards which the BMC has turned a blind eye.” The Holy Cross has been restored in the rubble of the structure that bore it, and community leaders are in the process of approaching court to establish its legality.

Bandra resident Anil Joseph agrees with the Archdiocese’s stand. “An average Catholic tends to point at saffron groups, but I feel it is foolish to do so. These attacks could be mischief or prompted by troublemakers who want to pit one community against another. A simple yet effective deterrant would be to install CCTV systems at all such structures and sites.”