Mumbai (The Hindu): The race to the Brihanmumbai Municipal Corporation (BMC) is heating up with the Bharatiya Janata Party (BJP) claiming on Sunday that there has been “match-fixing” in 42 wards between the Congress and the Shiv Sena in 42 wards. Civic polls in the city will be held on February 21. 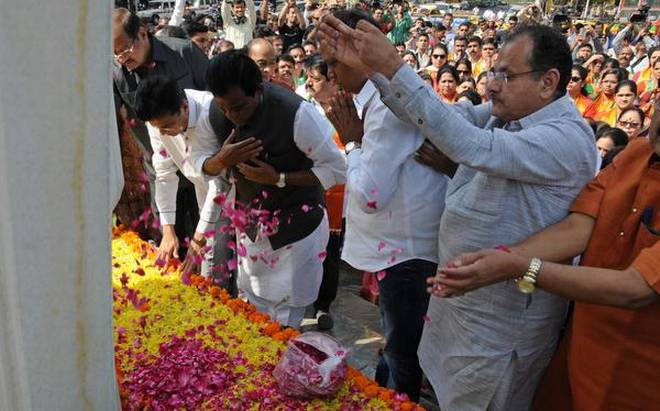 “Both parties have only one agenda and that is to defeat the BJP. Both parties have given tickets to candidates in a manner that satisfies each party’s needs. They have fielded weak candidates in these wards to benefit each other,” BJP city unit president Ashish Shelar alleged, and claimed to have a list of 42 such wards where the Sena and Congress have jointly picked candidates.

“This is against the principles of Shivaji Maharaj, anti-Mumbai and anti-Maharashtra. We are not scared of such tactics. We will not only win seats where we have strength but also where this match-fixing has taken place,” he said.

BJP State president Raosaheb Danve claimed his party tried till the eleventh hour to ensure an alliance with the Sena. “We have always wanted it, but it was the Sena which decided to snap ties. We are going to win Mumbai to ensure transparent and clean administration in the city,” he said.

Mr. Shelar claimed Shiv Sena chief Uddhav Thackeray decided against the alliance because of his party’s decision to take action against corrupt BMC contractors. “Prime Minister Narendra Modi began a war against black money, and our party arrested corrupt civic contractors and chargesheeted civic officials. This is the reason why this party (Sena) left us.”

To counter allegations by the Opposition that the BJP is trying to carve Mumbai out of Maharashtra, the party on Sunday launched its campaign with an oath-taking ceremony by its candidates at Hutatma Chowk, a monument erected to honour 105 martyrs who fought for a united Maharashtra.

In his first election rally in South Mumbai on Saturday, Mr. Thackeray had said his party will not allow the State to be “cut in to pieces”. His estranged cousin and Maharashtra Navnirman Sena chief Raj Thackeray too had alleged that the BJP was working towards separating Mumbai from the State.