Mumbai (The Hindu): Environmentalists, residents, volunteers and members of political parties, including the Shiv Sena, MNS and AAP, held a silent protest at Picnic Point in Aarey Colony on Monday morning. Wearing T-shirts and badges with ‘Save Aarey’ emblazoned on them, the protesters held posters urging the government not to go ahead with the construction of a car shed for Metro III. 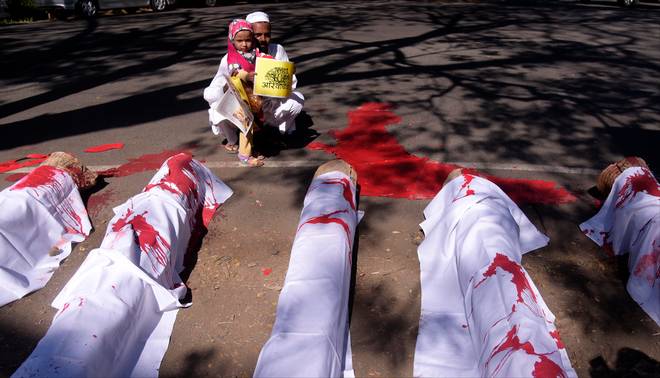 The project is part of Mumbai’s first underground Metro corridor, a 33.5-kilometre-long stretch from Colaba to SEEPZ (Special Electronics Export Processing Zone) via Bandra. The Environment, Forest, and Climate Change Ministry had recently in a notification decided to exclude 165 hectares from the eco-sensitive zone around the Sanjay Gandhi National Park to make way for the car shed.

Children also took part in the protest and marched with posters saying ‘Save Aarey, Save Earth’. One group of protesters sang the national anthem and formed a human chain around the trees in the area. “We came to know that the Environment and Forest Ministry cleared the proposal last week. The government spoke about shifting the project, but it went back on the plan,” said Disha Singh, a volunteer with Aarey Conservation Group.

Environmentalist Dayanand Stalin, a member of Aarey Conservation Group, said, “We are not against the Metro III project or anti-development. We are protesting the cutting down of trees to build the car shed. For the past two years, we have been holding protests. When the Mumbai Metropolitan Region Development Authority announced that there was no other place in the city to build the shed, we suggested seven alternative sites. It would also be cheaper for the Mumbai Metro Rail Corporation to do so.”

Manisha Chandra, another volunteer, said, “I’ve seen trees in the forest being cut down before. It wasn’t a pleasant experience. I underwent the same pain and panic when I learnt two years ago that 2,000 trees in Aarey would be cut down. This protest is important because we don’t want our future generations to suffer.” Prakash Bhoir, resident of Kirtee Pada and member of Vanshakti NGO, said, “This project will affect most of the 27 Adivasi colonies in Aarey. Not just the trees, but even the organisms that depend on them for their sustenance need to be protected."

Surkha Bhurkud, resident of Khambacha Pada, said the project would destroy her livelihood and takeover her land. She said the government had not yet laid roads to their colonies, but now it wanted to give them access to the Metro service. Rama Bishnoy, a marketing professional in Santa Cruz, said, “The government should think about the sustainable development of the city. Everyone knows what is right, yet we have to come out and protest?” Amruta Bhattacharya, an human resource professional, said, “It’s not the project but the environment that we should be concerned about. What will happen to the trees? Relocating them is not a wise move when we can shift the car shed.”

Ashok Pandit, filmmaker and nature lover, said, “We have suggested alternatives. Now, what stops the authorities from shifting the project? I urge the Environment Minister to join the residents in their protest. We want to preserve this rich forest land. That is our sole concern.” Harish Kasar, a BMS student, said, “This is not the first time that the government is using forest land for development. I came from Borivali because I think it is important to gather and protest against this project.”

Rachana Menon, a banker from Malad, said, “I’ve always believed that there can be no replacement to trees. Our lives depend on them. In the past few years, development projects have brought environmental and ecological destruction. I am concerned about the environment and that is why I'm working for the conservation of Aarey.”