Mumbai, (The Hindu): All 183 passengers on a Varanasi-Mumbai SpiceJet flight had a miraculous escape when the plane landed at 10.05 p.m. in the Mumbai airport but overshot the runway and got stuck in the loose soil at the end of the main runway. 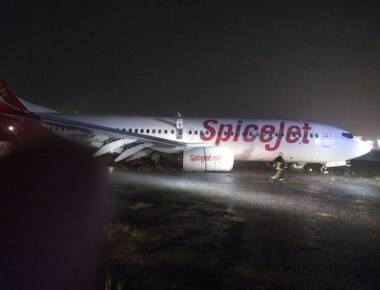 As an emergency was declared and flight operations to and from Mumbai came to a halt, passengers were evacuated using the escape slides and had to spend about 10 minutes next to the stranded aircraft before an airport coach arrived and took them to the terminal building. Passengers suffered minor injuries during evacuation.

Vile Parle resident Ojas Doshi (33) , who was returning home after attending a seminar in Varanasi, said, “There was a sudden jerk and the plane came to a jarring halt, which is when we learned that the plane had overshot the runway and come to a stop in the muck created by the rain. There was also some smoke from the landing gear. We jumped out of the emergency exit.”

Mr. Doshi said that all the passengers are now waiting in the terminal to reclaim their luggage, which was abandoned on the flight in the panic.

The passengers' troubles are far from over even after getting their luggage back, as cabs are in short supply due to the rains and many might be stranded for hours. A Mumbai International Ltd (MIAL) spokesperson said that arrangements was being made to provide all necessary assistance to the affected passengers.

In a statement, SpiceJet said, “SpiceJet flight, a Boeing 737 registered as VT-SGZ, operating flight SG 703 from Varanasi to Mumbai, with 183 passengers landed on Runway 27 in Mumbai. During landing the aircraft overshot the runway and skidded off into the unpaved surface due to wet runway conditions caused due to heavy rains. All passengers deplaned safely and taken to the arrival hall.”