Mumbai (The Hindu): The Standing Committee of the Brihanmumbai Municipal Corporation has mooted an allocation of Rs 1.90 crore for the beautification and upkeep of Balasaheb Thackeray memorial supposed to come up at Mayor’s Bungalow. 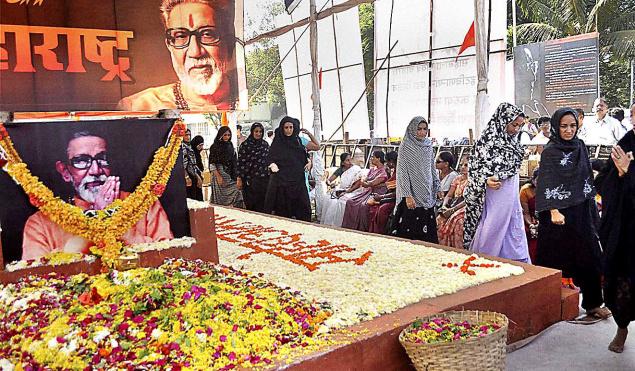 The Standing Committee met last week to discuss and review the civic budget presented by Mumbai Municipal Commissioner Ajoy Mehta on February 3. Mehta’s speech, however, did not mention any allocation for either Thackeray memorial or Uddhav Thackeray’s pet project of creating a theme park at Mahalaxmi Racecourse, embarrassing the Shiv Sena.

“Though Commissioner Mehta did not make reference to it in his speech, the booklet of civic budget mentioned a Rs 1 crore allocation for the Thackeray memorial for 2016-17. So the allocation for the memorial has continued in 2016-17 budget, and we have increased it by Rs 90 lakh. Rs five crore have been allocated to the theme park at Mahalaxmi Racecourse,” Shiv Sena group leader Trushna Vishwasrao said.

The Committee’s suggestions released by the BMC on Monday also mentions a provision for Rs two crore each for constructing a Mathadi Bhavan, and a Dabbawala Bhavan. Another Rs five crore have been allocated for beautification of the chowks in city and suburbs.

The Committee has also approved a provision of Rs six crore for renovation and beautification of the various amenities at Shahaji Raje Sports Complex at Andheri West. A provision of Rs two crore has been made for fitting bucket seats, Rs 1.5 crore for installing solar power equipment, Rs one crore for improving the swimming pool amenities.

Vishwasrao said that after Uddhav Thackeray mentioned that a theatre library should be established when he inaugurated the Natya Sammelan last week, the Shiv Sena has made a demand for reserving a plot for such a library in the 2016-2034 Development Plan.

Vishwasrao said a provision for Rs two crore has also been suggested for setting up ward-level garbage treatment plants in all 24 civic wards in the city to process the waste. “After the hullabaloo that the civic budget in Shiv Sena-ruled corporation did not make provision for Thackeray memorial, the Sena has tried to save its face. The Mahalaxmi Racecourse land is yet to be in possession of the corporation, so the allocation does not really mean anything,” Maharashtra Navnirman Sena group leader Sandeep Deshpande said.