Mumbai (The Hindu): The State government on Wednesday offered to rebuild Ambedkar Bhavan with its funding if the two disputing parties — Dr. Ambedkar’s family and the People’s Improvement Trust (PIT) — agree to it. The move comes a day after a massive protest was held over the demolition of the historic structure in Dadar. 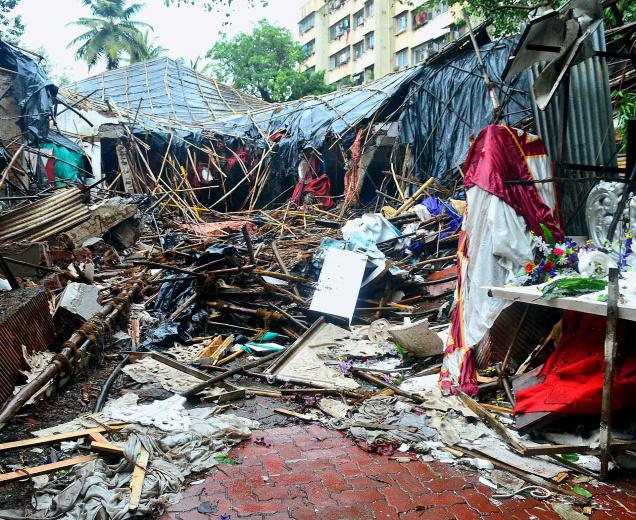 Replying to a calling attention motion moved by Shiv Sena MLC Neelam Gorhe in the council, Chief Minister Devendra Fadnavis said the government is ready to restore the structure as early as July 30.

He said, meanwhile, an inquiry will be conducted by the Brihanmumbai Municipal Corporation (BMC) to find out how the certificate classifying Ambedkar Bhavan as a dilapidated structure was issued by civic officials.

The PIT has claimed that the demolition was carried out as it had received two clearances from the civic body: the certificate classifying the structure as a C 1 category structure under section 354 of the BMC Act, and the Intention to Develop certificate sanctioning its redevelopment into a multi-storey building.

Mr. Fadnavis pointed out that though the building was classified as dilapidated, Buddha Bhushan printing press was not excluded from the classification, and hence it was flattened.

“It is important to inquire into the validity of the original certificate and BMC officers will be probed,” said Mr. Fadnavis, announcing that the heritage status will be granted to the press. Dr. Babasaheb Ambedkar had set up the press.

Lok Bharati MLC Kapil Patil demanded action against State Information Commissioner Ratnakar Gaikwad, who allegedly misused his constitutional position though he is not a PIT trustee. “His being a constitutional position, no FIR can be filed without the Governor’s nod. He cannot be removed by the State government. So we have decided to send a report on the Ambedkar Bhavan controversy to the Governor, and will be mentioning [Mr. Gaikawad’s] role in it,” said Mr. Fadnavis.

Congress MLC Narayan Rane urged the Chief Minister to call a meeting of trustees and family members of Dr. Ambedkar, instead of dragging the matter to court. “It will linger on indefinitely and nothing will come out of it.” Accepting Mr. Rane’s suggestion, Mr. Fadnavis said he is ready to sit with both parties and resolve the matter amicably.

With anticipatory bail plea of trustees of PIT, who are accused of illegally pulling down the Bhavan and the press, scheduled for July 22 at the Bombay High Court, Mr. Fadnavis said the government will oppose the plea.