Mumbai (The Hindu): As the state battles its worst drought in over four decades, information coming out of affected areas shows that the private tanker mafia is making the most of it as almost 95 per cent of tankers supplying water in the state are private ones. 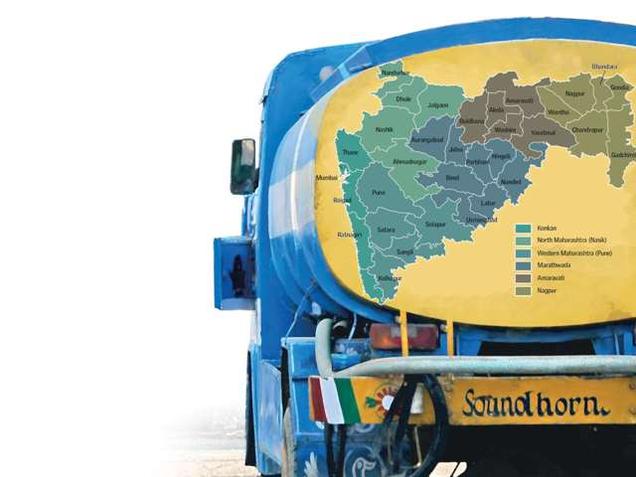 While the state’s dams are reporting water levels at a mere 17 per cent, 814 dams in worst-affected Marathwada including large, medium and small projects have only three per cent water left in them. However, government officials say private tankers are sourcing personal water sources and selling it had high rates. “It’s difficult to convince owners of private water sources to not sell it,” said Water Supply Minister Babanrao Lonikar.

Government officials from Marathwada districts told The Hindu that there is a definite boom in the water business. “Private tankers have capacities ranging from 6,000 litres to 12,000 litres. At many places, tractors are being converted into tankers. Water carried by a 6,000-litre tanker is being sold for anything between Rs 600 to Rs 800. They are minting money,” a government official from Osmanabad district said.

An official from Aurangabad added that private wells and bore wells are being used by private players. “Tankers and the bottling industry get water from undisclosed sources. There seems to be no law to control them,” he said.

Sources said the private tanker racket is being run by politicians. “Apart from profiting financially, they also claim credit for giving water to their drought-hit voters,” an official, who declined to be named, said.

Pradeep Purandare, a well-known researcher on water issues in Marathwada, said to his knowledge, no particular Act prohibits water being used and sold by private parties. “Apart from this, the bottling industry too needs to be controlled. It is running without government rules and restrictions. As of now, no action is being taken,” he said.

Many believe that the nexus between government officials and politicians is also preventing action against the water mafia. In the recently-concluded budget session of the Legislative Assembly, Revenue Minister Eknath Khadse had openly alleged that Congress leaders in local bodies manage the water mafia.

Parineeta Dandekar woth the South Asia Network on Dams, Rivers and People said overdependence on private tankers is a result of the government’s failure to provide water. “Has anyone bothered to check why people opt for private tankers? There are deficiencies in the government distribution system and no one is talking about them. Right now, a zero tanker situation is far from reality and we should all work towards this. It needs radical changes in the present water distribution system,” she said.