Mumbai (The Hindu): At Indian Institute of Technology, Bombay (IIT-B), technology is usually — and quite naturally — top-of-mind for all its residents. And at IIT-B’s annual Techfest, the buzz and excitement visibly increases. 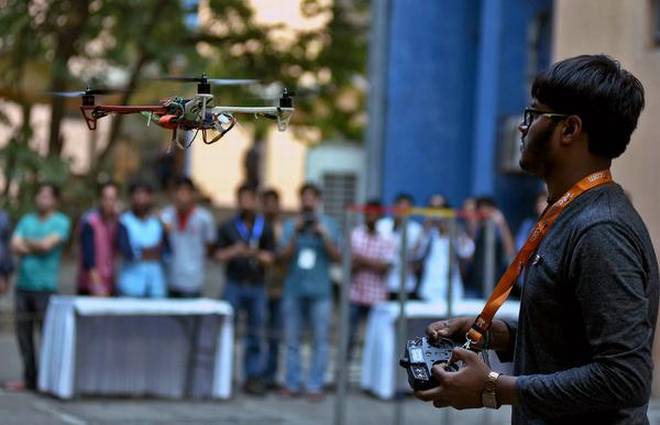 All around are students displaying active engagement with some kind of mechanical device: some carry aeromodels or drones; others are manoeuvring their ‘Galactica Troopers’ or moving heavy robots, their entries to Robowars. The conversations are about making drones, connecting remote controls, building underwater submarines, and things far more exotic to the layperson’s ears. “We made a drone out of waste material and the maximum spend was just Rs. 150,” says D. Venkat, who came along with his friends from Visakhapatnam. “Of course, we did have to spend Rs. 3000 to buy a transmitter.” Like this group, most of the teams seemed to be informal groups students, who built things on their own without support from either their colleges or professors.

Every year, Techfest attracts students from all over India and abroad as well. “The popularity of the festival is by word of mouth among the student community across the country,” say Vipul Ramtekkar, festival organiser. “The students know that we are the best and well-organised and so keep coming back.”

Mr. Ramtekkar, like the other organisers, is a student. Seniors like him lead, but even first-year students get long job-lists for the festival.

Running counter to the stereotype of gender imbalance at technology events, this reporter spotted significant numbers of young women in the organising committee and at the festival in general (though it must be said that active event participation seemed to be predominatly male).

One challenge is to stay fresh and exciting year after year. “Every year, we keep tweaking the challenges that the participants have to do,” Mr. Ramtekkar says. “These challenges are announced online around September, so that students have a minimum of 45 days to work on their models.”

Most of the participating students get accommodated in the IIT campus hostels. Each night, there are entertainment programmes that are a big hit with all the students.

Robowars is one the biggest attraction at Techfest; as its name suggests, it is all about robots fighting each other. At the event, even the judges — all IIT-B alumni — seemed as eager as the competing students, with some of them descending into the arena to examine damaged robots.

Sritej Siddam, co-ordinator of this contest, says they got around 200 entries, but short-listed only 60, on the basis of the features of each entry. “We also look at their dedication,” he says, “and we regularly take updates on their progress. The robots get more multi-dimensional features every year.”

Emotions run high at the arena.

Vivek Patel and his friends from Ahmedabad, all mechanical engineering students, had built a 54-kg Robot Mark-II that had cost them around Rs. 50,000, but they withdrew from the competition in less than a minute: their robot was badly damaged by its opponent and they did not want to risk further loss.

“We will repair our Robot and participate in other in other zonal competitions.” a dejected Patel says.

A Sri Lankan team, which came second to the Indian team in the International Robotics Competition round, too were quite disappointed with the turn of events and disparaged both the quality of the event the protocols followed, allegeing that Indian teams had an unfair advantage.