Mumbai (The Hindu): Groundswell of support for quota agitation puts Fadnavis govt. on notice. On July 13, a 15-year-old girl in Maharashtra was alleged to have been brutally gang-raped and killed by three men who were drinking liquor to celebrate the purchase of a motorcycle. When her body was found by her villagers, who were mostly from the Maratha community, her private parts had been mutilated, her hair pulled out by hand, and her hands and teeth broken. She did not make it to the hospital alive. 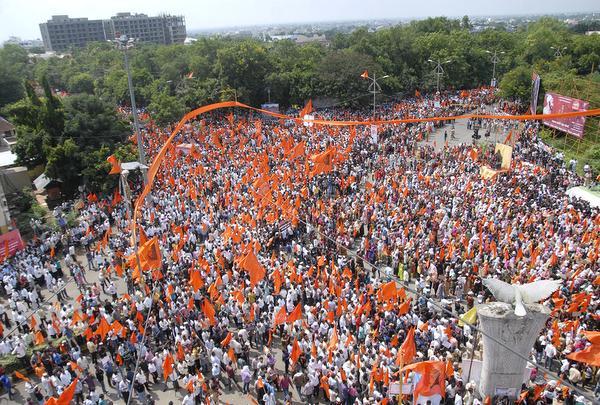 The incident happened in the Kopardi village of Ahmednagar district, around 300 km south east of Mumbai, and shocked the State. All three men were arrested a few days later, but the latent anger prevalent among the Maratha community since the previous Congress-NCP government passed a law in 2014, giving the community 16 per cent reservation in education and jobs, without transgressing on OBC reservation, was evident.

Last-ditch sop
The law was widely perceived as a last-ditch sop by a government on its last legs, intended to appease the politically influential Maratha community. Not much had happened since then, but when the rape-and-murder came to light, Kopardi became a powder keg for the community to agitate. The community decided — surprisingly without the support of any political party or any leader such as Hardik Patel in Gujarat who is leading the reservation agitation for the Patidar community — to hold silent rallies (“muk morcha” in Marathi) across the State. Such has been the groundswell since the first rally in August that the Devendra Fadnavis-led BJP-Shiv Sena government has had to sit up and take notice.

“These rallies are like a Maratha Arab Spring,” says Praveen Gaikwad, who heads the Sambhaji Brigade, a vocally pro-Maratha outfit that is said to be behind the rallies, even though there is no official “organiser.” “The notion gaining currency in the media is that political leaders or parties are behind it. This is wrong. On the contrary, several of them are attempting to take credit now that these agitations have struck a chord across Maharashtra.” Marathas are among the most influential communities in the State, accounting for about 34 per cent of Maharashtra’s population. Since the formation of Maharashtra on May 1, 1960, Maratha Chief Ministers have governed the State for around 30 years.

The State’ cooperative sugar movement, easily one of the strongest agricultural lobbies in the country, influences politics like no other industry does and is dominated by Marathas. Milk cooperatives, and cooperative banks, too, wield a large influence in State politics as well as policy-making. Both these industries are run primarily by Marathas.

One of the first rallies, held in Aurangabad district on August 10, was the turning point. Locals said they expected only 5,000 people. More than a lakh turned up, thus setting the template for future ‘silent agitations’ that have only grown in strength. The Aurangabad rally was held after the authorities denied permission for a rally in Mumbai.

Women leading protests
Almost every silent rally is led by women and they account for almost 30 per cent of the protesters.

Their demands: implementation of the reservation law, amendment to the Prevention of Atrocities against SC/ST Act, and death penalty to the accused in the Kopardi case.