These men may have been behind your call drops

Mumbai: If you have been experiencing call drops over the last two to three months in Mulund, Vikhroli, Powai or Andheri, chances are your cellular service provider might not be responsible for it. The Vikhroli police have arrested nine people and busted a racket where Base Transceiver Station (BTS) units of cellular service providers were being stolen and sold as scrap. The police have recovered over 200 stolen BTS units. 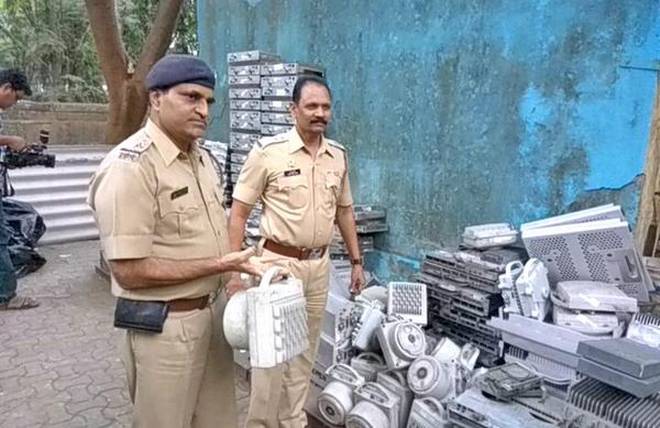 According to the Vikhroli police, the racket was being run by a gang of small-time thieves that previously stole cables and other electronics from construction or road repair sites and sold them in scrap. The gang allegedy graduated to stealing BTS units after realising that the heavy, solid metal bodies would fetch a heftier price in the scrap market.

BTS units are mounted on top of cellular service towers, and are responsible for conveying the cellular signal to a consumer’s cell phone when it passes from the range of one tower to another. A break in this signal results in calls being dropped, causing inconvenience to consumers and losses to the service providers.

On December 4, an employee of a telecom infrastructure company in Vikhroli saw a group of men removing a BTS unit from a tower on the Eastern Express Highway. The men fled after seeing the man, who then informed the police about the incident.

“While conducting inquiries, we found that apart from the five complaints we had received about BTS units being stolen, several police stations like Navghar, Parksite, Powai and MIDC had also registered similar complaints, indicating that this was the handiwork of an organised syndicate,” said Senior Police Inspector Shridhar Hanchate.

The police then made inquiries with scrap dealers and collectors in the eastern and central suburbs, and arrested a dealer named Kantilal Jain in Chembur. Based on the results of his interrogation, the police recovered 273 BTS units worth over Rs 1.77 crore from a shop in Kurla belonging to a dealer called Abbas Malik. Further investigation led to the arrest of seven more people.

“The accused used to wear reflective jackets like the ones worn by repair workers and steal the BTS units during the day. Anyone with a basic understanding of electrical equipment and the right tools can remove BTS units. The accused sold the units, which are worth Rs. 3 lakh at least, for Rs 4,000 to Rs 5,000 to scrap dealers,” Mr. Hanchate added.

The other arrested accused have been identified as Vishal Ahire (19), Shehran Verma (30), Ganesh Kamble (20), Vinodkumar Harijan (20), Nadeem Ahmed (24), Salman Abbasi (23) and Abbas Malik (48). The police said that Ahire, Verma and Kamble did the actual stealing, Harijan drove the tempo to transport the BTS units, while Abbasi is a scrap collector.

They have been remanded in police custody till December 15. The police have so far found 25 complaints registered against them in various police stations in the city.

Dr. Sumit Chowdhury, former CIO of Reliance Jio, said the replacement cost of each BTS unit for service providers is around Rs. 3 lakh. “However, the basic damage should be measures in terms of inconvenience caused to consumers, losses caused to the service provider due to call drops and the replacement cost. It also depends on the location of the tower. While some towers are only coverage towers providing signal to consumers in transit, others are located in residential areas, where the gross damage would be higher,” said Dr. Chowdhury, who is now the CEO of Gaia Smart Cities.