Mumbai (The Hindu): Thousands gathered at the Church of Our Lady of Remedy at Poinsor in Kandivali on Sunday to protest the Brihanmumbai Municipal Corporation (BMC) proposal to demolish a Cross on the church’s premises and to flatten part of the church’s graveyard to enable the widening of S.V. Road. 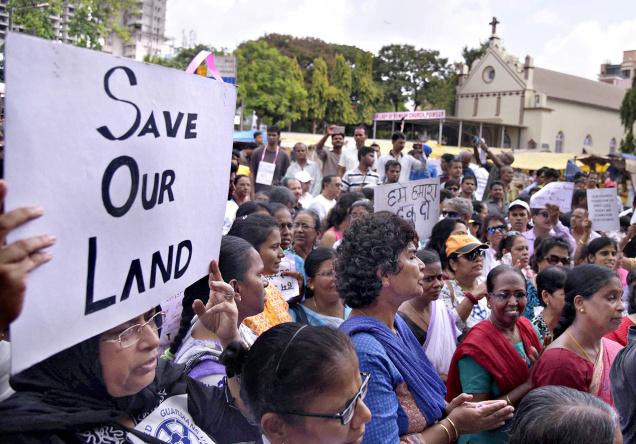 The protesters said the 16th century church was a grade II heritage site and the Cross is 300 years old. The graveyard has 150 graves. “The church, being a heritage site, cannot be demolished,” said Dolphy D’Souza, spokesperson of Save Our Land (SOUL), one of the organisations participating in the protest.

About 3,000 people from 15 parishes gathered at the protest organised by Guardians United, SOUL, Watchdog Foundation, St. Vincent De Paul Political & Civic Cell, and other citizen groups. They formed a human chain around the church as a symbol of shielding its boundary.

On February 27, the BMC had razed an 80-year-old chawl that belonged to the church, the protesters said, and on April 21, the local ward office served the church a noticeproposing to demolish the Cross and flatten the graveyard.

“This amounts to defilement of the church, which is an offence under Section 295 of the IPC,” said advocate Godfrery Pimenta, a trustee of Watchdog Foundation.

Nicholas Almeida, another member of Watchdog Foundation, said they will move the court to ensure that the Cross is not pulled down. “I will file a petition at the Borivali court on Wednesday and seek an inquiry into the proposal,” he said, adding that the road widening plan was lopsided as the authorities were planning to widen just one side of the road.

The parishioners said there was a dearth of Christian burial grounds in Mumbai. “Right from Dahisar to Khar, there is no other graveyard on the western suburbs. The road construction will eat into the graveyard’s capacity by half. A body will then be needed to be taken to Sewri or Sion,” said Alfi Quinny, a parishioner.

Besides, the protesters alleged that the road widening has been planned to promote the business interest of one particular building located in a lane adjacent to the church. “If parts of the church are destroyed and the road is widened, this building will be standing on the main S.V. Road, which will push up sale of the flats here. It is a builder-politician-BMC nexus,” alleged Mr. D’Souza. The protesters were soon joined by people from other communities. “We plan to assemble parishioners from over 100 parishes from all over Mumbai and keep opposing this,” said Mr. D’Souza.

The protesters also said that politicians would fall out of favour if they failed to respect religious sentiments of the community. “We may be a minority, but collectively, we constitute 20 per cent of the electorate and a difference of 500 votes can make or break a candidate,” said Mr. Pimenta.