Mumbai (The Hindu) : Shiv Sena president Uddhav Thackeray on Saturday tendered a public apology to the Marathas, especially the women in the community, for hurting their sentiments due to a cartoon published in Saamana recently. 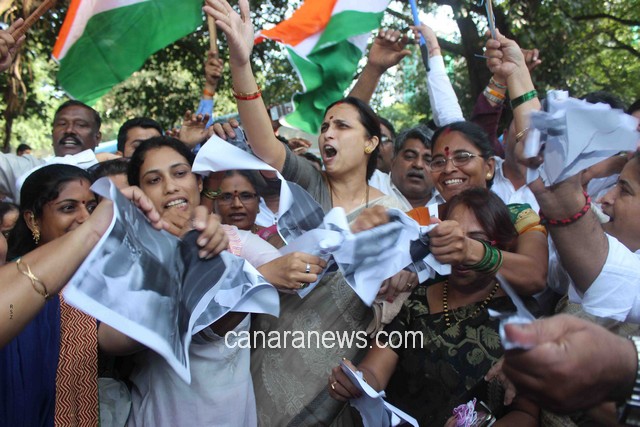 A cartoon published in the September 25 edition of Saamana had punned on the Marathi words “Mook morcha” (silent morcha) and “Mooka morcha” (kiss morcha) to comment on the silent protests by Marathas demanding reservation. The cartoon had offended the Maratha community and members staged protests and burnt copies of Saamana in several places. The Opposition had attacked the Shiv Sena, demanding a public apology from Mr. Thackeray, editor-in-chief, and Sanjay Raut, executive editor of Saamana.

Breaking his silence five days after Sena came under fire, Mr. Thackeray tendered an apology at a Press conference on Saturday.

Blaming vested interests and the Opposition for raking the controversy and defame his party, Thackeray said “There was no intention to insult or hurt sentiments of anyone. We respect women. Even inadvertently, we do not insult or hurt the sentiments of women. But, if the cartoon has hurt sentiments of women because of the controversy raked by certain people, I – as the son of late Sena chief Bal Thackeray, Shiv Sena president and editor of Saamana – apologise from the bottom of my heart to all mothers and sisters of Maharashtra. I have no such ill-feelings in my heart,” Uddhav said.

Asked why he was silent for five days after the controversy broke, Thackeray said “I had deliberately waited to see which elements are trying to exploit this and gain from it. Taking advantage from the controversy, certain vested interests floated rumours that our MLAs, and MPs have resigned, but no such thing happened. I thank Shiv Sainiks for standing by the party’s leadership and the people of Maharashtra for reposing their faith in Shiv Sena during the period of controversy”.

Thackeray reiterated that the government should convene soon a one-day special session to discuss Maratha reservation and amendments to the Atrocities Act – two of the key demands made by the Maratha community.

“The Chief Minister has already said reservation would be given to Maratha community, and I am confident that he will do it. We have submitted a memorandum in writing to demand a special session as soon as possible. Various leaders will take a position on this issue in public, and may change it later. That’s why, we want this to be debated in the assembly which has some sanctity,” Thackeray said.

Meanwhile, Sambhaji Brigade, a Maratha organisation whose members were arrested for an attack on Saamana press in Navi Mumbai, welcomed Thackeray’s public apology and signalling curtains on the cartoon controversy.

However, Congress spokesperson Sachin Sawant said Thackeray apology was aimed at containing political damage to his party ahead of the local body polls scheduled from November. “Uddhav Thackeray should have apologised immediately, but now he realises that the resentment in the Maratha community can damage Sena’s prospects in the forthcoming elections. Saamana had tried to make fun of Maratha rallies and insult women who participated in these protests,” Sawant said.

The Cong-NCP-led Opposition had demanded a public apology from Thacheray while the Mumbai BJP had blamed Sena MP Sanjay Raut for the controversy and sought his apology.