Mumbai (The Hindu): The war of words between ruling allies in the State and Mumbai’s civic body, Shiv Sena and Bharatiya Janata Party (BJP), is showing no signs of abating. On Wednesday, while inaugurating the Britannia storm water pumping station at Reti Bunder, Sena chief Uddhav Thackeray took potshots at the BJP saying, “I am optimistic that a happy monsoon season has descended upon Mumbai city once again. Those criticising us on issues should also have the courtesy to credit us for the good work accomplished such as the Britannia storm water pumping station.” 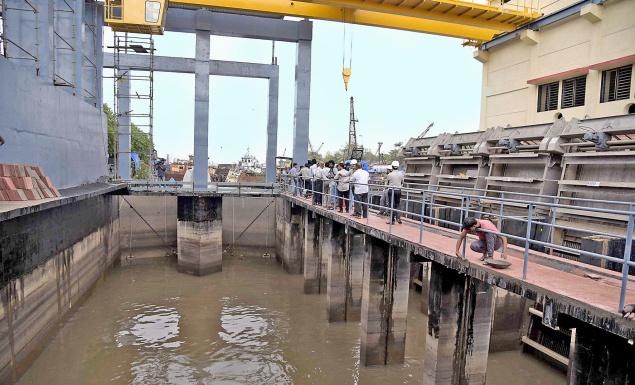 The pumping station, with its ability to flush out 36,000 litres of water per second into the sea, has afforded Mr. Thackeray the reason to smile even as BJP continues to criticise his party over corruption in the Brihanmumbai Municipal Corporation (BMC).

The acrimony between the two parties reached such a pass last week that BJP MLA Ashish Shelar even suggested that the Sena chief will find himself behind bars over road contract scams unearthed recently in the civic body. Shelar had said, “Even those who claim karoon dakhawla [We did what we said] would be jail soon.”

Mr. Shelar, listed as one of the dignitaries, for was conspicuous by his absence during the inauguration of the pumping station. His earlier statements had prompted some Shiv Sena activists to burn his effigy in protest.

Mr. Thackeray can now even cock a snook at his alliance partner and say, “ parat karoon dakhawla [We have done it again]”. The Rs. 103 crore facility has seen fast paced activity over the last 40 days, to ensure it was made fully functional before the monsoon set in.

The Haji Ali pumping station and Irla pumping station (completed in 2011), Love Grove and Cleveland facilities, and now the Britannia station have bolstered the city’s efficiency to discharge storm water. Deputy chief engineer in the Storm Water Drains department (mechanical and electrical division) Sitaram Bedge, said: “We were working 12 hour shifts to meet the deadline. It was a race against time, and challenges arising out of procurement dynamics. We had two vendors, which were tackled professionally to ensure work completion before time. Since the past 10 days, the pumps have provided relief from water-logging at the Hindmata Junction.”

Yet, the July 2005 floods remain a grim reminder of the inadequate and inefficient civic infrastructure. An engineer attached to the Bandra Reclamation sewerage pumping station said, “On July 27, 2005, the incessant rains resulted in an overflow at the Bandra pumping facility. The sewage lines, storm water drains and heaviest ever rainfall in Mumbai compounded matters. We were unable to flush out water. As the security risk increased, the electricity supply to the Bandra facility was stopped for safety reasons. Short circuits could have endangered public lives. Water from the lagoons stormed back right up to the Western Express Highway at the Kalanagar junction, a stone’s throw from the Mr. Thackeray’s residence.”

Same was the case with the Ghatkopar pumping station that discharges storm water into the Thane creek. It had to stop working when water in catchment areas reached unprecedented levels. Following this flood, new and enhanced pumping stations were approved.

Mr. Bedge said, “There is 20,000 litre of diesel that is stored for a steady 1,000 litre supply to each of the six pump sets at the Britannia facility, and there is no scope for any power supply disconnection. The pumping station will therefore be continuously able to discharge storm water without a dependency on any power utility, except when high tides are in force.” By next year, the BMC expects the Guzder Band pumping station to start.