Mumbai (The Hindu): Unlike Balasaheb, the Sena chief got a lukewarm response from the cadre. Lashing out at the Congress-led Opposition for raising questions about the Indian Army’s ‘surgical strikes’ in Pakistan Occupied Kashmir (PoK), Shiv Sena chief Uddhav Thackeray on Tuesday said, “Those who questioned surgical strikes have no Indian blood flowing in their veins; [instead they have the] sewage of Lahore and Karachi. File sedition cases against those who questioned the army.” 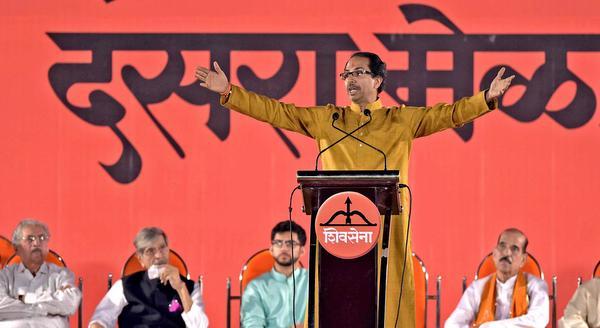 Mr. Thackeray was addressing the party’s annual Dussehra rally at Shivaji Park, Dadar, continuing the tradition started by his father and party founder, the late Balasaheb Thackeray. Bal Thackeray’s speeches usually enthused the party’s rank and file — they would shout slogans and sing songs — and send out strong political messages. Uddhav Thackeray’s ambiguity on current burning political issues — the Maratha agitation, the SC and ST (Prevention Of Atrocities) Act, challenges by the BJP — got him a comparatively unenthusiastic response from the cadre.

He said that his party stands with Marathas: “Fulfil justified demands of Marathas but please ensure not to touch concessions to others while doing so.” He has already demanded a special legislative session to discuss Maratha reservation and the Atrocities Act.

Congratulating Prime Minister Narendra Modi on the strategic strikes, Mr. Thackeray asked him to go further. “Now bring a time when Pakistan will be known as Hindustan on the world map. Army needs the leadership which stand behind it.” He said that though his party had criticised Mr Modi in the past, it would praise him for his good deeds.

Taking a dig at the BJP’s stand against Pakistan, Mr Thackeray said that the Sena has been unequivocal in its hard line. “My father started opposing Pakistanis in India. Last year we opposed a book function, but this very government extended protection against our sainik s. Why do you (BJP) talk against Pakistanis now?”

Warning the BJP’s state leaders for their sniping against the Sena, Mr. Thackeray dared its partner to break alliance. “Attack us only after breaking the alliance. Do not back-stab us. We will show you our surgical strike if you continue to do that.”

Concluding his speech, Mr. Thackeray said that the Sena stands with the BJP as an equal. “Come along if you want to, but we will not come behind you with a begging bowl.”