Why is Modi not in J&K: Shiv Sena

Mumbai (The Hindu): The war of words between the Shiv Sena and the BJP was revived on Sunday, with Sena chief Uddhav Thackeray targeting Prime Minister Narendra Modi for not visiting Jammu and Kashmir, where protests following the killing of terrorist Burhan Wani have already claimed 47 lives. 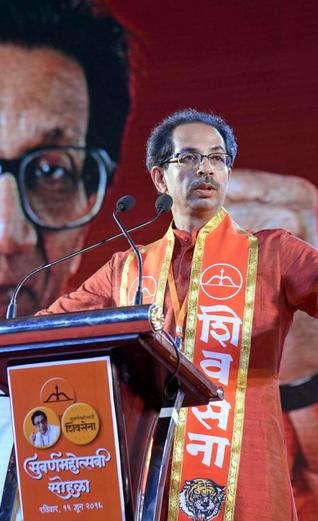 In the first part of an interview published in the Sena mouthpiece, Saamana , Mr. Thackeray claimed India has no option but to declare itself as a 'Hindu Rashtra’ if it wants to tackle problems like the ISIS.

He said in the interview: “During elections, our PM visited all the states, including J&K. Why can’t the same PM stand firmly behind the Hindu brethren now? Today, he has the army and police with him. He has the power. If the person fulfils the responsibility entrusted with him, then the governance of the country will improve, clearing the fog of uncertainty. If, despite all this, one expects the Sena to take a lead, we will surely do that. But then what is the use of others? They should step back.”

Reiterating his party’s aggressive Hindutva stand, Mr. Thackeray reminded the BJP of former Prime Minister Atal Bihari Vajpayee’s slogan of “ ab Hindu maar nahi khayega ” (now, Hindus will not get beaten up). “But look at Kashmir. Hindus are getting beaten up. Wherever you build the Ram temple, there is one temple in Amarnath and if the pilgrimage is getting cancelled because of terrorists, then who should take the blame for it?” he asked. He also criticised the BJP for its alliance with J&K’s Mehabooba Mufti-led government.

The Sena chief has called a special meeting of all its MLAs and ministers from Maharashtra on Monday, following complaints that the developmental works by his party’s legislators are purposely being sidelined by the BJP-led state government.

A senior party leader said, “He wants to review happenings in the state and the response to Sena legislators’ demands from the BJP leadership. It has been observed that our demands are purposely sidelined.” Mr. Thackeray will be discussing the issue with his legislators and is likely to intervene if needed. Besides complaints against BJP ministers, he will also review the performance of Sena ministers.