Paris, (PTI) Marion Bartoli, the 2013 Wimbledon champion, says she is coming out of retirement and returning to the tennis tour next season.

"Hi, guys. I have something to tell you: I am coming back. ... It's going to be a huge challenge," Bartoli said in a video she put on Twitter. 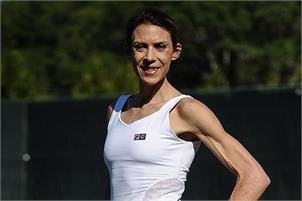 "I have still a lot of practice ahead of me, but I am hoping to be ready for March and the Miami Open."

Bartoli mentioned three events she is particularly looking forward to: the French Open, the Fed Cup and, of course, Wimbledon.

She surprisingly won her only Grand Slam title while seeded No. 15 at the All England Club four years ago. Less than two months later, after losing a match at another tournament, she abruptly retired from professional tennis.

Bartoli was an original player -- and personality -- during her playing career.

She hit two-fisted shots for forehands and backhands, just like her idol, Monica Seles.

Bartoli was coached by her father, a doctor, and they came up with other unique elements.

She would cross her arms before serving, never bouncing the ball before a toss. She would stand well inside the baseline to receive an opponent's serve. And she would hop in place or take practice swings between points.

Her first big breakthrough came in 2007, reaching the Wimbledon final before losing to Venus Williams.

Then came the magical two-week run to the championship there six years later. Bartoli never dropped a set and capped her fortnight with a 6-1, 6-4 victory over Sabine Lisicki in the final, closing the match with an ace.

A year later, Bartoli became the first woman in 17 years who declined to try to defend her Wimbledon title.

At a news conference before the 2014 tournament, Bartoli tugged at the collar of her white top to reveal strips of blue tape providing support for her right shoulder and explained: "Literally, I can't even lift my arm every morning."

That, she said, was why she harbored "definitely no regrets at all" about walking away from tennis back then.

She since moved on to other pursuits, including TV commentary, launching a shoe line and designing jewelry.