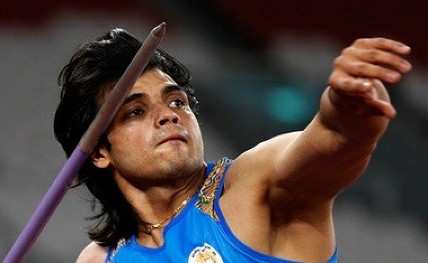 Neeraj threw 88.06 metres in his third attempt to clinch the gold, India's second medal in the event in Asiad history. Gurtej Singh had taken a bronze at the 1982 edition in New Delhi.

Liu Qizhen took silver for China with a personal best of 82.22m. Pakistan's Arshad Nadeem was a surprise finisher at the bronze medal position.

Languishing at the fifth position till late in the competition, the Pakistani was initially struggling to get past the 75 metre mark. But he hit 80.75m with his fourth attempt which put him on the podium.

Shivpal Singh, the other Indian in the fray, registered 74.11m to finish eighth.

In his first attempt, Neeraj recorded 83.46 metres. He fouled his second attempt but the next three attempts saw him throwing 88.06m, 83.25m and 86.36m respectively.

Neeraj again fouled his final attempt but it did not matter as the other athletes in the field came nowhere close to his performance.

Such was the domination of the 20-year-old that even his lowest throw of 83.25m was better than the nearest competitor.

"I could have crossed 90m today but I was repeatedly getting too much height in my throws. But I am happy with my performance," Neeraj told the media after the event.

"My next target is wining gold at the Diamond League Final which starts on September 13," he added.

Sudha grabbed her second medal at the Asian Games as she claimed a silver medal in the women's 3,000 metres steeplechase.

Sudha, the reigning Asian champion, clocked 9:40.03 minutes to finish behind Bahrain's Winfred Yavi, who completed the race in 9:36.52 minutes.

Thi Oanh Nguyen of Vietnam bagged the bronze medal in 9:43.83. She and Sudha were among the group that was behind Winfired, who set the pace early.

Sudha had finished fourth at the 2014 edition in Incheon but this time she ensured that she finished within the top three with a tight finish as she surged past Chinese competitors Zhang Xinyan and Xu Shuangshuang and Nguyen.

Nayana James, the other Indian in the fray, finished at a disappointing 10th in the 11-member field with an attempt of 6.14m.

In the men's 400 metres hurdles, Dharun claimed the silver medal with a new national record.

Dharun recorded his personal best of 48.96 seconds to finish second behind Qatari Abderrahman Samba, who delivered a Games record of 47.6s.

The Tamil Nadu athlete held the previous national record mark of 49.45 seconds, set during the Federation Cup in March.

Here in this Indonesian capital, the 21-year-old became the first Indian to break the 49s timing.

Dharun was a slow starter and was outside the top three positions till 300 metres. He was contending between fourth and fifth spot. But he made a great dash in the final 100m to finish second as India got a medal in the discipline after a gap of eight years.

The bronze medal went to Takatoshi Abe, who timed 49.12 seconds, while Taiwan's Chieh Chen was fourth with a timing of 49.62 seconds.

Another Indian in the fray, T. Santhosh Kumar, completed the race in 49.66 seconds.