Kolkata, (IANS): Indian kabaddi had for decades been a story of kingsize performance but minuscule recognition. The indigenous sport has fetched the country laurels galore, but it is only now that the game and the players are grabbing national, even international, publicity and celebrity backing, thanks to a glitzy new professional league. 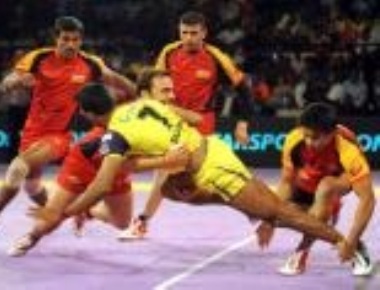 Five World Cup titles and seven back-to-back Asian Games gold medals are ample testimony to the nation's unquestioned global monopoly in a sport that requires raw power and silverquick reflexes. But the stupendous success did not quite see kabaddi flourishing in India in terms of promotion and infrastructure.

The Pro-Kabaddi League, now into its second year, has however brought the game into national limelight, courtesy top-level corporate sponsorship, star backing and media coverage. Shedding its tag of a rustic game not fit for city slickers, kabaddi is being talked about in elite drawing rooms.

In the 2014 Asian Games final, India beat Iran 27-25 to bag its seventh successive yellow metal, a record which even betters the country's gold run in Olympic hockey from 1928 to 1952 when the nation had five successive top podium finishes.

But the close match indicated other countries were fast catching up. "In the last few years, the game has been taken up by various other countries and some are doing exceptionally well. It is now set to be a part of the Olympics. The game is being recognised and played all over now," Amateur Kabaddi Federation of India secretary Dinesh Patel told IANS.

Patel felt more financial help from the government would help players focus on the game without worrying about how to earn their livelihood.

"In the last few years, we have received government funds to develop the infrastructure. But I believe government jobs for the players would do them a world of good. They can then concentrate on the game rather than focussing on how to look after their families," Patel said.

Just when the sport was staring down the barrel into an unknown future, a few good men decided to pull it up by giving it a makeover. Kabaddi, which was being mastered in sandy backyards, was suddenly brought into colourful mats with lycra strips around, as the Pro-Kabaddi League took off.

Arjuna awardee and former India skipper Biswajit Palit believes the game needed such a boost to draw the younger generation.

"The league has brought the game into the limelight. What this game needed was promotion and we have it in plenty here. Kabaddi has now reached places no one could imagine it would go," Palit told IANS.

"I can see it slowly spreading and it is now being played in schools. The league has had an overwhelming response; you can see there's always full house," said Palit, who captained India to the gold in the 1986 Asian Games.

Palit also wants the game to be promoted in the districts and hopes more youngsters will come forward and embrace kabaddi.

"Focus on grassroots. The game needs to be promoted and spread to the districts and so we are trying to run local leagues there," he said.

As for the Indian women's kabbadi team, it has not lagged behind either and has won two Asian games and one World Cup it has featured in so far.

Speaking on the success achieved by the women's team, Arjuna Award winner Rama Sarkar told IANS: "It is a sport where women have been at par with men with regard to success. I want more girls to come and be a part of this wonderful sport."

She said infrastructure has improved in the last four to five years. "We have now started practising on mats; earlier it used to be on dirt. A lot has changed and the game is garnering more interest day by day." A PKL-style women's league was also in the pipeline, Sarkar added.