India sink to a shocking defeat in first Test

Galle, PTI: In an extraordinary twist to the game, India today capitulated to an embarassing 63-run defeat in the first cricket Test against Sri Lanka, who scripted one of the most remarkable turnarounds in recent Test history. 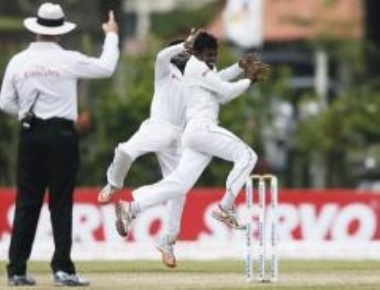 Set a tricky victory target of 176, the listless Indians surrendered tamely to be skittled out for their lowest score of 112 in just 49.5 over to give the islanders a 1-0 lead in the three-match series.

Left arm spinner Rangana Herath scalped 7/48 and Tharindu Kaushal took 3/47 as the lankans bamboozled the Indians to bundle them out in just 41.5 overs today and wrap up the Test match in three half days on a track which gave some assistance to the slow bowlers.
It was a dramatic performance from the hosts who came back from the dead after conceding a massive 192-run first innings lead to turn the table on the Indians who had themselves to blame for the debacle.

The Indians allowed the hosts to wriggle out of a precarious 95-5 in their second innings just at the stroke of lunch yesterday with Dinesh Chandimal changing the complexion of the game with a brilliant counter-attacking 162 not out. From then on, the Lankans clawed back into the game.

India's ploy of going into the game with five specialist bowlers at the cost of sacrifing a batsman also backfired badly as they did not have the batting firepower to chase even a modest target.

The Indian batsmen, for some strange reason, went into the fourth day's play with a defensive frame of mind and Shikar Dhawan took as many as 36 balls to score his first run in the morning. The knuckle injury he suffered in the first innings did not help his cause.

Though the Indians are regarded as good players of spin bowling, they showed a shocking lack of technique and foot work on a pitch that had no real demons.
Ajinkya Rahane (36) and Shikhar Dhawan (28) were the only two batsmen who could hang around for some time as wickets kept tumbling with exasperating regularity with six wickets falling for 55 runs in the pre-lunch session.

Kaushal claimed the last wicket of Amit Mishra to trigger scenes of celebrations in the Sri Lankan camp as the players hugged each other to celebrate a memorable victory.
The humiliating defeat also served as a huge mood dampener for Indian fans who were keen to celebrate the Independence day with a win. The two teams will now travel to Colombo for the second Test to be held at the P Sara Oval from August 20.