Nottingham, (PTI): Ravaged by injuries and struggling like never before for form, inspirational Australian captain Michael Clarke today announced he would retire from Test cricket after the fifth and final match of a horror Ashes series against old foes England. 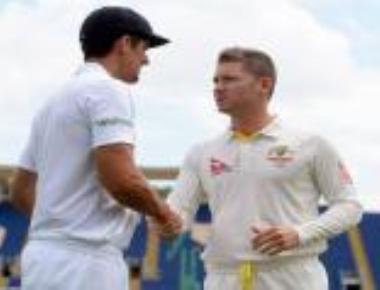 The 34-year-old, whose prolific career has been marred by nagging back and ankle problems that required him to go under the knife earlier this year, has already quit ODI and Twenty20 cricket.

"I'll have one more Test and that will be the end of my career. I'm retiring from international cricket," Clarke said after Australia were hammered by an innings and 78 runs in the fourth Ashes Test here today.
Today's defeat gave England an unassailable 3-1 lead and the coveted urn. The fifth and final match is scheduled from August 20 at the Oval and would be Clarke's 115th five-day game.

"I want to play the last Test at The Oval and give it one more crack. You never want to walk away. (But) My performances over the past 12 months have not been acceptable to me," said the right-handed batsman who broke down at the presentation ceremony.

Clarke, who took over from Ricky Ponting in 2011, has not scored a 50 in his last six Tests -- a miserable stat for a player who made 12 hundreds in his first 30 matches as captain. Adding to this was the ignominy of losing to traditional rivals England away from home with two of the defeats coming inside three days.

"Test cricket is about the Ashes. We tried our best, I certainly tried my best but we got outplayed. It's time for the next generation," said the dejected skipper, who has scored 28 hundreds in his career so far with an unbeaten 329 being his best. Clarke's 114 Test appearances so far have yielded 8628 runs at an impressive average of 49.30. He scored 7981 runs in 245 ODIs at an average of 44.58.

"I made a decision last night after I got home. Boys were surprised, I don't think they expected me to walk away right now. I owe the game everything. I'll take so many memories away," said the cricketer, who won over admirers with his sensitive handling of the Australian dressing room after the tragic on-field death of young batman Philip Hughes last year.

"I'm looking forward to sitting and cheering the boys on. It's the right time. Hopefully I'll get a microphone and sit beside you in the commentary box."

Clarke was candid enough to admit the lack of form he was enduring for a while now. "I'll always hold myself accountable and I have been nowhere near where I want to be and certainly haven't led from the front," he said at the post match presentation.

Clarke, whose back problem severely hampered his career progress, retired from ODIs after leading Australia to a fifth World Cup title this year. Never too keen on the Twenty20s, Clarke quit the format back in 2010 after playing just 34 matches.

"Retirement isn't the hardest decision when you perform as I have performed over the last series. It's the right time to walk away now. I've been very lucky to play over 100 Tests," he said.