Dharamsala, (PTI) A horribly out-of-form Ajinkya Rahane will be aiming to get his mojo back as India, formidable even without regular skipper Virat Kohli, eye another 'Whitewash' against Sri Lanka in the three-match ODI series, starting on Sunday. 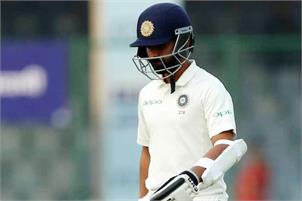 From the polluted 'Gas Chamber' of National Capital, the action has now shifted to the most scenic cricket stadium in the country in the backdrop of the pristine Dhauladhar Range.

The primary objective for chief coach Ravi Shastri and stand-in captain Rohit Sharma will be to look at various combinations in both departments against an out-of-sorts team.

With the match starting at 11:30 am in cooler confines and bouncy conditions, the toss could prove to be a crucial factor during the opening ODI.

Even without their inspirational skipper, a batting line-up comprising Rohit, Rahane, Dinesh Karthik, MS Dhoni, Kedar Jadhav could prove to be a handful for any opposition.

While the opening slot seems locked with Rohit and Dhawan at the top, Rahane is likely to get a chance at the number three position with Kohli given a much-needed rest.

However if Dhawan, who was down with viral fever on Friday, pulls out then Rahane could be seen opening the innings.

The stylish Mumbai batsman had scored three half- centuries and a hundred in the bilaterals against West Indies in June-July, before blasting four successive fifties against Australia at home.

With the South Africa Test series round the corner, the team management would certainly want their favourite 'Jinks' to break the jinx.

Dinesh Karthik and Mahendra Singh Dhoni is likely to take the next two slots, before Kedar Jadhav comes at the number six.

Karthik had scored a fifty in the two chances that he got in the West Indies series, while against New Zealand the wicket-keeper batsman hit scores of 37, 64 not out and 4 not out in the three games.

Dhoni, on the other hand, had faced criticism when he struggled to get going in the second T20I against New Zealand which the hosts lost by 40 runs and the former skipper will look to silent his detractors.

While Shreyas Iyer and Manish Pandey are also in the team, the duo will get a look-in if both Dhawan and Jadhav, who has a hamstring injury, are ruled out.

All-rounder Hardik Pandya will continue to be a vital cog in India's wheel as he completes what has been an exception year in international cricket for him.

One among orthodox leg-break bowler Yuzvendra Chahal and chinaman Kuldeep Yadav will be in the playing XI along with Axar Patel, whose primary job is to restrict runs.

Jasprit Bumrah and Bhuvneshwar Kumar will spearhead the pace department and the visitors will have a tough time dealing with them in the opening as well as at death overs.

Among others, it will be interesting to see if skipper Rohit decides to give rookie Siddarth Kaul a chance as a third pacer at the HPCA Stadium, which is expected to aid swing bowling.

Sri Lanka have shown the stomach for a fight in the Delhi Test after barely managing to save the first Test in Kolkata and losing the second at Nagpur and they would be eager to erase the ignominy of losing 0-5 at home in September.

The visitors were also humiliated 0-5 by Pakistan in their last bilateral series in October and it will take really a special effort from Thisara Perera's men to tame India at their own backyard.

For Sri Lanka, Kusal Perera and Asela Gunaratne is returning to the team after recovering from injuries and a lot will depend on these players.

Sri Lanka will bank on young batsman Dhananjaya de Silva, who scored a fighting century in the third Test to force a draw at Delhi.