Saina, Sindhu to clash in the quarterfinals at Indonesia

Jakarta, (PTI) Saina Nehwal and P V Sindhu will meet in an all-Indian quarterfinal clash after both won their respective preliminary matches at the USD 350,000 Indonesia Masters, adding another chapter to their new rivalry. 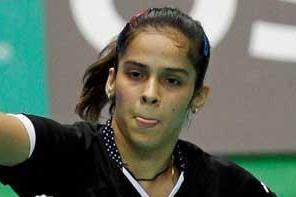 London Olympics bronze-medallist Saina, who is coming back from an ankle injury, took 37 minutes to overcome World No.20 Chinese Chen Xiaoxin 21-12 21-18, while Sindhu stream- rolled Goh Jin Wei of Malaysia 21-12 21-9 in a one-sided contest.

Young men's doubles pair of Satwiksairaj Rankireddy and Chirag Shetty too entered the quarterfinals after getting past Chinese Taipei's Liao Min Chun and Su Ching Heng 21-17 21-16 in the second round.

Saina and Sindhu clashed twice in the international circuit so far with both winning once. At the 2014 Syed Modi Grand Prix Gold, Saina defeated Sindhu, who returned the favour at the India Open Super Series last year.

The celebrated duo was scheduled to meet in the Premier Badminton League opener between Awadhe Warriors and Chennai Smashers but Saina pulled out due to an ankle injury.

In the domestic league, Saina and Sindhu faced each other twice. While Saina, playing for Hyderabad HotShots then, had defeated Sindhu (Awadhe Warriors) in the 2013 Indian Badminton League, Sindhu beat Saina in the PBL 2 semifinal in January, 2017.

Today, Saina hardly broke a sweat in the opening game as she didn't allow the Chinese to come near her after grabbing an 8-3 lead early on.

In the second game, Saina once again moved to an 11-3 lead but this time Chen narrowed it down to 17-19 before the Indian closed out the match.

Olympic silver-medallist Sindhu, on the other hand, gave a lesson in badminton to Goh in a lopsided contest. She led right from the start and never allowed her opponent to recover.

Commonwealth Games champion Parupalli Kashyap suffered a 18-21 18-21 loss to Chong Wei Feng of Malaysia in the first round yesterday.