India ace Saina Nehwal etched her name in the history book by assuring herself of at least a bronze medal after reaching the semifinals of the World Badminton Championship in Jakarta on Friday. 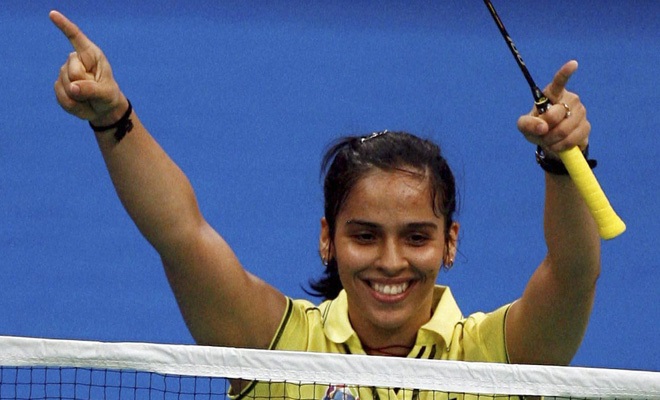 The World No. 2 Indian showed tremendous athleticism and precision to outwit 2011 edition gold medallist and former World No. 1 Wang Yihan 21-15 19-21 21-19 in an hour and 12 minutes gruelling battle.

The Olympic bronze medallist will next take on Indonesia's Lindaweni Fanetri, against whom Saina has a 2-1 record.

With this win, Saina broke her jinx of reaching the semifinals in her last five outings and became the second Indian female singles shuttler to assure of a medal after P V Sindhu, who had won the bronze twice in 2013 and 2014. This will be Saina's maiden medal at the World Championship.

The pair of Jwala Gutta and Ashwini Ponnappa had won India a bronze medal in the women's doubles competition in 2011 after a gap of 28 years.

On a day, Sindhu failed to complete a hat-trick of medals at the World Championships and 13th seeds Jwala and Ashwini also fell at the quarterfinals, Saina showed her prowess as she dug her heels and rode on her accurate strokes and fitness to emerge victories at the Gelora Bung Karno Stadium.

In the opening game, Wang had opened up a 7-4 lead early on but Saina produced some brilliant strokes to draw level at 8-8.

A deception at the front court took the Indian to 10-8 before Wang's erratic service helped Saina to go into the break with a slender 11-10 advantage.

Post interval, a long rally ended with Saina reaching 13-11 after Wang shot was buried at the nets. A couple of long shot by Wang saw Saina reach 15-11.

The Indian rushed on to a net shot to concede a point but she bounced back with a body smash.

A net dribble took Saina to 19-15 and with Wang finding the net again meant the Indian had five game point advantage.

Saina didn't waste any time and sealed it with another razor sharp cross court smash, which found Wang napping.

In the second game, Wang came out all cylinder blazing and caught Saina on the wrong foot initially to reach 3-1.

A long rally ended with Saina challenging a call, which she lost as Wang led 4-1.

Saina slowly found her bearing as she rode on her power smash, immaculate touch and athleticism to claw back after another long rally. She took lead at 6-5 with an aggressive smash.