New Delhi, Aug 11 (PTI) Sania Mirza was today recommended for the prestigious Rajiv Gandhi Khel Ratna award, becoming only the second tennis player ever to be named for the country's highest sporting honour. 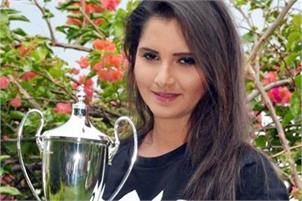 Sania is only the second tennis player after Leander Paes to be named for the top award. Paes had been bestowed the honour way back in 1996 after his bronze medal in the Atlanta Olympics.

Besides doing well on the professional circuit, Sania had also won the gold medal and the bronze medal in the mixed and women's doubles categories of the 2014 Asian Games in Incheon, South Korea.

The Hyderabadi girl had won the Arjuna award in 2004 and was the favourite for the top award this year. In 2006, she was bestowed the Padma Shri -- the country's fourth highest civillian honour.

The committee included eminent athletes and sports journalists apart from top officials of the Sports Ministry.