Mumbai, (IANS): From actors like Anupam Kher, Anil Kapoor and Randeep Hooda to actresses like Jacqueline Fernandez and Sonakshi Sinha, tinsel town has given a thumbs up to superstar Salman Khan's "Bajrangi Bhaijaan", calling it his best film till date. 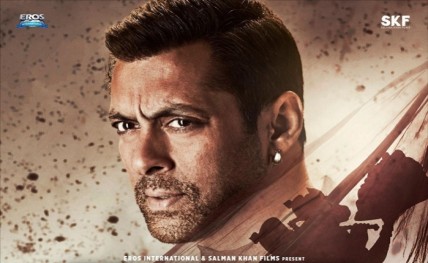 Not only has Kabir Khan's directorial garnered appreciation for Salman's “outstanding” acting, but the concept of the film, which delves into India-Pakistan ties, has also been praised by many.

“Bajrangi Bhaijaan”, which also stars Kareena Kapoor Khan and Nawazuddin Siddiqui, narrates the story of a Hindu man on a mission to take a young Pakistani girl, who is dumb and mute, back to her country. Released on Friday, it chronicles his adventures and experiences faced during his road trip.

Since its first look was released, the craze of “Bajrangi Bhaijaan” was palpable, where many stars like Aamir Khan and Shah Rukh Khan publicised the film on Twitter. Now other B-Town celebs too have joined the league and have praised the movie on the micro-blogging site calling it a “must watch.”

Here's what these stars have written:

Anil Kapoor: Only @BeingSalmanKhan can tug at your heartstrings, yet leave u feeling hopeful & joyous!...in #BajrangiBhaijaan, definitely his best!

Shilpa Shetty: A poignant story of selfless love n still entertainin@BeingSalmanKhan is faab in a never seen b4 avatar. Must watch

Anupam Kher: BAJRANGI BHAIJAAN is funny, moving & at places even poignant. Take a bow Kabir Khan. Your story telling is excellent. Nawaz is brilliant.:) BAJRANGI BHAIJAAN is @BeingSalmanKhan's best work till date. It is also d Best Film ever made on the human side of Indo-Pak relationship.

Jacqueline Fernandez: It's official. #BajrangiBhaijaan is Salman's bestest ever. But who really steals the scenes is little Harshaali! I'm a fan!

Karan Johar: There wasn't a dry eye at the end of the screening of #BajrangiBhaijaan....an emotional journey majestically performed by @BeingSalmanKhan!

Farah Khan: Just saw Bajrangibhaijaan.. No words to describe how outstanding it is! @BeingSalmanKhan u made me cry.. Ur best to date!

Mika Singh: 2day is Jumma, means Friday. So #BajrangiBhaijaan is gng to rock theatres all over!one of the best films to watch of Bro @BeingSalmanKhan

Randeep Hooda: The most important&1of the best @BeingSalmanKhan films #BajrangiBhaijaan is a must watch.@kabirkhankk steers the ship with finesse. super

Adnan Sami: #BajrangiBhaijaan is the Ultimate "Samjhauta Express" between Indo-Pak.. It whistles it's way straight into your heart & is there to stay!

Athiya Shetty: #Bajrangibhaijaan you've left me in tears. @BeingSalmanKhan sir you've played yourself in this one. #speechless

Nikhil Advani: If you are Indian/Pakistani and wondered what all the fuss has been about go and see #BajrangiBhaijaan. It's not a film. It's a statement.

Mohit Suri: Can't remember the last time a film made me cry,laugh,clap,whistle #BajrangiBhaijaan is all that and more @BeingSalmanKhan @kabirkhankk wow

Wajid Khan: Indian film industry should be proud of #BajrangiBhaijaan A must watch for every Indian n #Pakistani's n as I always say

Daisy Shah: Words can't do justice to explain wat u feel abt this. #BajrangiBhaijaan is a heartfelt movie! @BeingSalmanKhan @kabirkhankk #takeabow