I want to do comedy films: Shilpa Shetty

Mumbai,(PTI) Shilpa Shetty may have been away from films for a while but has no desire to be seen in movies just for the sake of it. 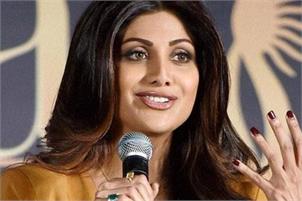 "I think I have become too practical when it comes to (choosing a) script. My script sense has changed and that comes with time and experience. This is my 25th year in the industry and I have not done a film for eight-nine years, people still have faith in me, be it through small screen or the digital space," Shilpa told PTI.

The 42-year-old actor says films are part of her life but she is now looking for something that she has not done before.

"I am happy to be still relevant in this time and age and doing more interesting things that I have not done before. I am very happy in this space. I do get film scripts and after few pages I feel I have done this before," she said, adding that a script should be worthy of the time that she spends away from her son.

"I am not interested in doing drama, there is enough drama happening in our lives. I want to do a funny film, a film that is entertaining and if possible show it to my son."

Shilpa has produced 'Dishkiyaoon' in 2014 that had Harman Baweja but it did not do well at the box office.

"Something looks good on paper but it doesn't always translate onscreen. We did our best as producers and I believe we need to do good work. We have been doing TV shows and we are doing a lot of animation for kids. I am interested in doing stuff for kids."

She recently launched her second book "The Diary Of Domestic Diva" that compromises of quick and hazzle free healthy dishes.