Beware! Binge drinking can kill you in sleep

New York, March 15 (IANS) Perceived as a lighthearted, fun and humorous rite among college students, binge drinking may lead not only to impaired judgment but also increase the risk of dying in one's sleep, say experts. 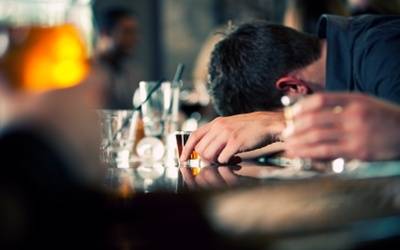 Alcohol acts as a depressant, impairing basic bodily functions, such as the gag reflex, leaving people vulnerable to choking on their own vomit and dying in their sleep, researchers from University of Alabama at Birmingham in the US explained in an official statement.

Alcohol can also irritate the stomach, making the suppression of the gag reflex especially problematic, the researchers said.

Overdose of alcohol can occur when a person has blood alcohol content (BAC) sufficient to produce impairments that increase the risk of harm.

"As BAC increases, so does alcohol's effects and the risk for harm," said Megan McMurray from University of Alabama at Birmingham in the US.

"Even small increases in BAC can decrease coordination, make a person feel sick and impair judgment. This can lead to injury from falls or car crashes, leave one vulnerable to sexual assault or other acts of violence, and increase the risk for unprotected, unintended intercourse," McMurray pointed out.

"When BACs get even higher, amnesia or blackouts occur. If a person has signs of alcohol poisoning, it is very dangerous to assume that an unconscious person will be fine by "sleeping it off,'" McMurray explained.

The researchers estimated that each year 1,825 US college students ages 18-24 die from alcohol-related unintentional injuries.

"It is important to understand what alcohol is, why it's problematic, and what a person can do to minimize the risk should they choose to drink," associate professor Peter Hendricks said.