San Francisco, (IANS) A team of researchers has used an engineered protein to direct chemotherapy drugs to tumours, in the hope of creating "guided missiles" targeting only cancer cells. 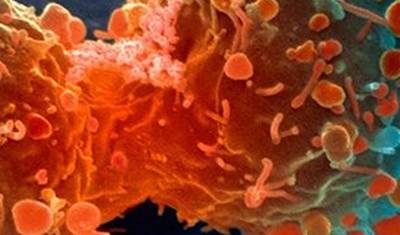 The work by Jennifer Cochran, associate professor of bioengineering at Stanford University in northern California, builds on the antibody approach to deliver a drug directly to tumours, bypassing healthy cells and overcoming some of the uglier aspects of chemotherapy, Xinhua news agency reported.

In cancer chemotherapy, the drugs do often kill cancer cells, but also damage other quickly dividing cells in the body, causing side effects ranging from cosmetic, like hair loss, to disabling; and the ugly occurs when the drug dose needed to kill a tumour is more than what a person's body can handle.

A dose high enough to infiltrate the tumour could be deadly to other cells in the body if the tumour does not have much of a blood supply and very little of the drug, which is delivered through the bloodstream, can get in.

To get around this problem, some therapies recently approved in the US use antibodies to deliver a drug directly to tumours.

"Antibodies can be limited for treating solid tumours because they are too big to penetrate well," Cochran said about her approach using a protein. "The idea is that a smaller molecule could diffuse into the tumour better."

The specialised protein has the potential advantage of being able to pass through the barrier that protects the brain, thereby being able to treat brain tumours. It is also smaller than the antibody and might be able to reach dense tumours with little blood supply.

The idea originated with the knowledge that cancer cells, and the blood supply that feeds them, often produce particular molecules known as integrins on their surface. The goal of Cochran's team was to create an engineered protein that could latch tightly onto those integrins and be used as a drug delivery vehicle.

To engineer a protein to bind integrins, Cochran employed a technique called directed evolution to rapidly engineer millions of proteins and screen for the qualities she's interested in.

Her team started with a protein called knottin, so named for its knot-like shape, and used directed evolution to engineer a protein variant that would bind strongly to integrins.

The researchers then worked on two strategies for attaching chemotherapeutic drugs to the evolved knottin. One strategy used a portion of an antibody to connect the drug to the knottin, mimicking antibody therapies already on the market.

The team tested this approach in a lab dish and in mice with implanted human tumours and in each case the knottin successfully delivered the drug to the tumour and killed the cancer cells.

A second approach, developed in collaboration with postdoctoral fellow Nick Cox in the Stanford ChEM-H Medicinal Chemistry Knowledge Centre, used a small chemical link to attach a chemotherapeutic drug directly to the knottin.

The knottin-drug combination effectively killed breast, ovarian and pancreatic cancer cells in a lab dish. The targeted drug delivery was highly effective against cancer cells, including those that had developed a resistance to the drug alone.

"We found that when the drug was delivered by the knottin, its potency was greatly enhanced in treating highly-resistant tumour cells, like those found in pancreatic cancer," Cox said.

In both examples, the knottin portion of the multipart compounds binds to integrins present at high levels on cancer cells, delivering the drug into the cancer cell and bypassing healthy cells.

Once inside, the drug is released and kills the cell. Because the drug is less active when connected to the knottin and cannot get inside cells of the body that do not express integrins, this approach could reduce side effects on other tissues and organs.

The work was published in a series of papers in the June issue of Molecular Cancer Therapeutics and the June 15 issue of Angewandte Chemie.