London, (PTI) Text message reminders can help reduce people's blood pressure by encouraging patients to collect and take their medication and educate them about hypertension and its treatment, a new study has found. 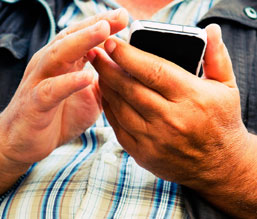 Researchers from the Oxford University in UK and University of Cape Town in South Africa conducted a study on over 1300 adults with high blood pressure in the Cape Town area.

he first group then received weekly messages at a time and in the language they chose (Afrikaans, English, or isiXhosa).

he messages, designed in consultation with people in low-income communities in the area, encouraged patients to collect and take their medication and educated them about hypertension and its treatment.

Extra messages were sent to remind people when medicine was ready for collection or when they had a clinic appointment.

he second group received the same text messages but were able to interact with the automated service by calling to change or cancel appointments or change the language or time of the messages. The third group received standard care.

hose who had had reminders were also more likely to have taken their medicine at least 80 per cent of the time – almost two thirds of those getting information messages reached that standard compared to just under half of those receiving standard care.

"The improvements seen were equivalent to those expected from intensive one-to-one behavioural counselling, which is usually more expensive," said Andrew Farmer from Oxford University.