Why some dementia patients lose ability to understand language

New York, (IANS) Greater buildup of a toxic protein found in Alzheimer's disease on the left side of the brain can lead to a rare type of language dementia because of which people lose ability to express themselves and understand language, says a new study. 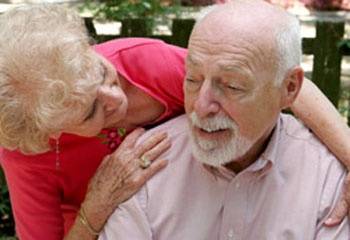 Using a special imaging technique, the scientists discovered the toxic build-up of amyloid protein is greater on the left side of the brain -- the site of language processing -- than on the right side in many individuals living with language dementia called primary progressive aphasia (PPA).

"By understanding where these proteins accumulate first and over time, we can better understand the course of the disease and where to target treatment," said lead study investigator Emily Rogalski, associate professor at Northwestern University in Illinois, US.

"It is important to determine what Alzheimer's looks like in PPA, because if it's caused by something else, there is no sense in giving a patient an Alzheimer's related drug, because it would be ineffective," Rogalski said.

Previously, amyloid accumulation in the brain could only be studied after an individual with Alzheimer's disease had died.

Now, a new technology called Amyloid PET Imaging allows researchers to study the build-up of the toxic amyloid during life.

The researchers examined and compared beta-amyloid buildup in the brain using the Amyvid amyloid PET imaging tracer between individuals with PPA and those with Alzheimer's memory dementia, the more common disease that causes memory problems.

Both types of dementia (memory and language) can be caused by an accumulation of beta-amyloid, an abnormal toxic protein in the brain.

By using Amyloid PET Imaging, the scientists found there was more amyloid in the left hemisphere parietal region of individuals with PPA compared to those with Alzheimer's memory dementia.

Scientists scanned 32 PPA patients, and 19 of them had high amounts of amyloid and were likely to have the Alzheimer's pathology.

They were compared to 22 people who had the Alzheimer's memory dementia. Those with the memory dementia had the same amount of amyloid on the left and right side of the brain.