Aakrosh Divas fails to make an impact in Dakshina Kannada

Mangaluru (The Hindu): Congress, Left parties stage protests; BJP organises celebrations across the district. While activists of the Congress and Left parties staged protests against demonetisation here on Monday, the Bharatiya Janata Party and right-wing organisations celebrated the move of the Union government. 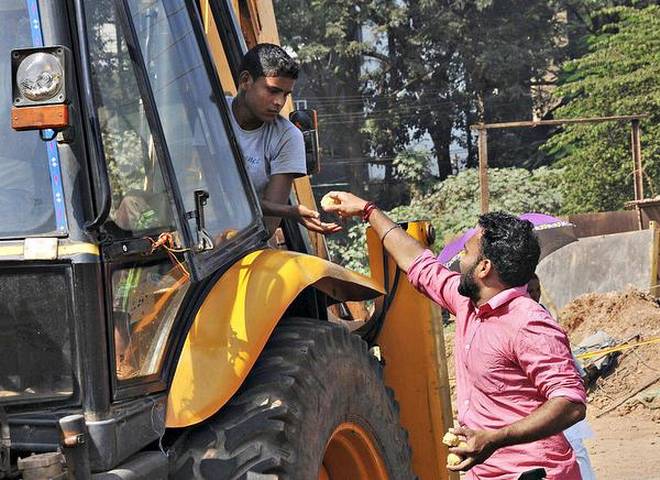 Pushcart vendors and labourers from Bunder area under the aegis of the Shramikara Sangha took out a march and staged a protest near the office of the Kanara Chamber of Commerce and Industry.

Addressing the protesters, Democratic Youth Federation of India State president Muneer Katipalla said that demonetisation had hit labourers from the unorganised sector hard. The labourers were finding it difficult to get wages for the past three weeks.

Though there were other ways of legally bringing back black money, the Centre choose to demonetise high-value currency and forced untold misery on the poor and the middle class.

At a protest meeting organised by the Communist Party of India (Marxist) near the office of the Deputy Commissioner, CPI (M) leader K.R. Shriyan said that Mr. Modi had ridiculed the poor by stating that they were having a good sleep while the rich were having sleepless nights.

The poor had suffered more than the rich, he said. Congress activists led by Ivan D’Souza, MLC, and Mayor Harinath staged a protest near the statue of Mahatma Gandhi at Hampankatta.

Another group of Congress workers staged a protest near B.R. Ambedkar Circle.

Protests and demonstrations were held by Congress and Communist Party of India activists across the district.

Vedike activists distributed sweets among bus drivers, passengers and motorists at Pumpwell. Subash Padil, the prime accused in the infamous attack on young men and women at a home stay in 2012, who is also the vedike’s city unit secretary, led the celebrations. The Yuva Brigade activists went to banks and post offices and thanked the staff for their work.

However life remained unaffected throughout the district with business establishments, government offices, education institutes and transport sector functioning as usual.