Koppal, DHNS: Anwar Ali (inset) lies in a pool of blood as he seeks help from onlookers. An 18-year-old cyclist lay bleeding after he was run over by a bus here on Wednesday, and all eyewitnesses did was capture his plight on their phones. Soon, footage of the boy’s dying moments appeared on social media. 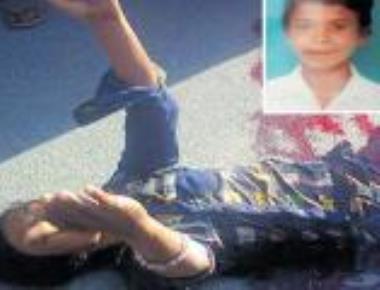 Writhing in pain as blood streamed out of his torso, he called out desperately for help, but no one was ready to respond. An ambulance eventually arrived and took him to hospital. Anwar Ali, a resident of Devaraj Urs Colony, collided with a Karnataka government bus going from Hubballi to Hosapete. He was caught under a back wheel, but emerged alive.

The accident occurred at 8.40 am at Ashok Circle here. The only help Ali got was from a man who poured water into his mouth. Ali had bled profusely by the time the ambulance came for him. The hospital gave him seven bottles of blood. He died at 2 pm.

The boy might have lived had he been treated right after the accident, a doctor said. About 35 minutes had passed by the time he got any medical attention. Ali was the son of Shahabuddin Yaklasapura, and worked at a shop selling tiles. The town police have registered a case. Laws exist in Karnataka to protect citizens who help during such emergencies, yet no one volunteered to help Ali.

Earlier this year, the state government passed the Good Samaritan Act to protect citizens who rush to the aid of accident victims. They no longer need to fear police and legal harassment. The government has also launched the Harish scheme to victims of road accidents during the ‘golden hour’.

It is named after Harish Nanjappa (24), who pleaded for his organs to be harvested for donation as he lay dying on the highway.