‘CM has failed to spend promised funds on irrigation projects’

Mumbai (The Hindu): B.S. Yeddyurappa, president of the State BJP and MP, has criticised the Congress government in the State for its misrule and utter failure in rising up to the aspirations of the people even three years after coming to power. “Corruption in rampant in every sphere, the government has failed to tackle the continuous drought situation facing the State for the past couple of years, betraying the people, especially farmers, by not initiating any steps to protect their interest by implementing its promise made before coming to power, among other things. This is how one can analyse in a nutshell the achievement and performance of the Congress government, headed by Siddaramaiah,” Mr. Yeddyurappa said. 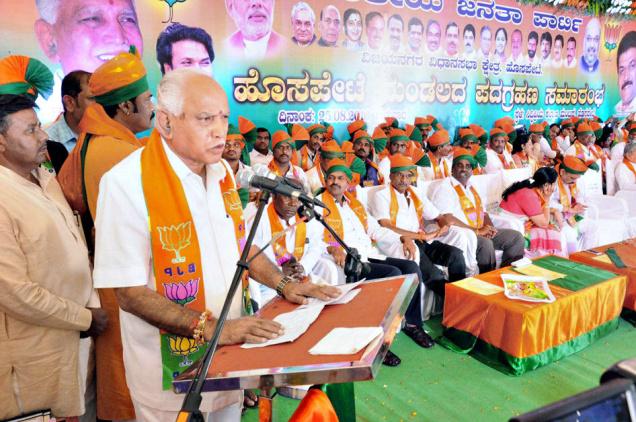 Addressing party leaders and workers here on Thursday, Mr. Yeddyurappa charged Mr. Siddaramaiah with failing to spend the promised Rs. 10,000 crore on the on-going irrigation projects on the one hand and not initiating steps to recoup the State’s legitimate share of water from the Tungabhadra dam going waste into the river course owing to accumulation of silt over the years, on the other.

“During the BJP rule, we had taken a decision to construct a balancing reservoir near Navile in Koppal district to store water that was going waste into the river course. The Congress, after coming to power, did nothing to implement the scheme which goes to show the concern it has towards farmers, which is very unfortunate,” he said and added that “if the BJP is returned to power, its first decision would be to give approval to the Navile balancing reservoir scheme within 24 hours and ensure that the work began on an earnest note.”

Recalling the achievements of his party’s government, Mr. Yeddyurappa challenged the Congress to come out with facts and figures to prove that its performance was better than the BJP’s.

“Prime Minister Narendra Modi has been relentlessly striving for the development of the country and it is our duty to support him and strengthen his hands by regaining power in the State. I appeal to all party workers and office-bearers to dedicate themselves to ensuring a BJP victory in the coming elections,” he said.

B.S. Anand Singh, MLA, who presided over the programme, appealed to Mr. Yeddyurappa and MP Shobha Karandlaje to remind the Prime Minister about declaring Hampi, the erstwhile seat of the Vijayanagar empire, as a heritage city.

Govind Karjol, Basavaraj Bommai, C.T. Ravi, Raju Gouda, all former Ministers, Ms. Shobha Karandlaje and B. Sriramulu, both MPs, were among others who spoke.