Mangaluru (The Hindu): Having witnessed the outbreak of coconut black-headed leaf eating caterpillar affecting coconut palms in Mangaluru in the State and Kasaragod district in Kerala, agencies concerned have responded immediately and decided to launch an awareness drive on February 1 for farmers about biological control of the pest. 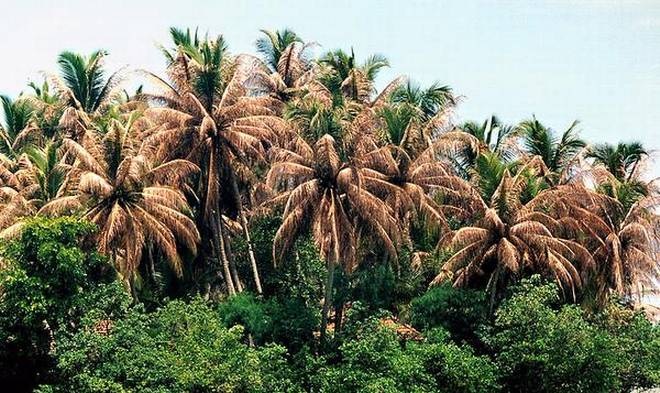 A team comprising scientists from the Central Plantation Crops Research Institute (CPCRI), the Krishi Vignan Kendra and officials from the Horticulture Department from Dakshina Kannada and also in Kasaragod district of Kerala will start the campaign on Wednesday by visiting some of the farms in Ullal in Mangaluru.

A decision was taken during a meeting held at CPCRI in Kasaragod in Kerala on Monday in which scientists from Krishi Vignan Kendra and officials from the Horticulture Department from the State and Kerala participated.

The meeting was convened by CPCRI Director P. Chowdappa following the sporadic outbreak of black-headed caterpillar, Opisina arenosella walker, on coconut palms on either sides of the National Highway 66 between Thokkottu and Ullal in Mangaluru. According to a press release, the CPCRI conducted a preliminary survey and found more than 2,000 coconut palms infected by this pest.

The release said that the larvae extensively feeds on the chlorophyll of the leaves resulting in coconut palms drying up.

As the pest population will increase during summer and dry weather, there was a need for a proper management plan to prevent further spread of the pest.

In the meeting held on Monday, CPCRI principal scientist Chandrika Mohan said that biological control developed by the institute has been successful in controlling the pest.

Another scientist Prathibha P.S. said that the CPCRI has released parasitoids for the affected area.

She said that frequent release of parasitoids and constant monitoring of the area with the help of Krishi Vignan Kendra scientists and Horticulture Department officials can control the spread of the pest. An action plan for management of the pest is also ready, the release said.