Udupi (The Hindu): The issue of drinking water dominated the general body meeting of the Udupi City Municipal Council (CMC) here on Tuesday. 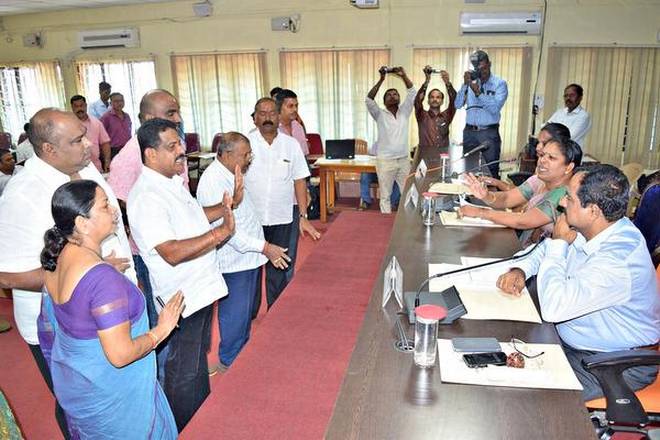 Raising the issue, Ramesh Kanchan, councillor, said that there was water shortage in some parts of the city and demanded to know the measures taken by the CMC to mitigate it.

Narismha Nayak, councillor, said that the CMC should take steps to deal with water scarcity from now itself instead of waiting till March or April, when it would be too late.

Shashidhar Hegde, Assistant Engineer, CMC, said that the inflow in the Swarna was expected to last another 10 days. Already, the CMC had taken steps to store water at the Baje and Shiroor dams on the Swarna.

The bund the near the Shiroor dam on the Swarna had been built at 1.2 metres as against 0.8 metres which was being built earlier. So too steps had been taken to store water in the mini hydel dam next to the Baje dam. This would increase the water storage capacity in the Shiroor and Baje reservoirs significantly, he said.

D. Manjunathaiah, CMC Commissioner, said that 42 wells and borewells had been identified in different parts of the city. The wells would be cleaned and water supplied if the situation warranted during peak summer, he said.

To a query, Mr. Manjunathaiah said that the CMC by itself could not remove any silt that had accumulated in the Baje reservoir. It had already urged the district administration and the Department of Mines and Geology to take action in this regard. Pramod Madhwaraj, district in-charge Minister, had called a meeting on this issue on January 10 and a decision would be taken on that day, he said.

Mr. Hegde said that the only way the water retention capacity in the reservoir could be increased was by removing big boulders at Bhandarkatte.

M.R. Pai, councillor, said that though the CMC wanted to supply water from wells if there was chronic water shortage, it should take care to purify and treat it so that there were no complaints about the water supplied.

Earlier, the meeting started on a stormy note as the Opposition Bharatiya Janata Party (BJP) councillors marched into the well of the House and argued with CMC president Meenakshi Bannanje demanding answers on the proposed new Visvesvaraya market complex building.

They relented only after their queries were answered. They urged the CMC to take all stakeholders into confidence while taking up the project.