HD Kumarswamy says he has evidence against corruption in BJP

Bengaluru: Janata Dal (Secular) state president H D Kumaraswamy said that he has evidence to prove his charge that money through cheques was sent to BJP in Delhi during the BJP regime in the state. 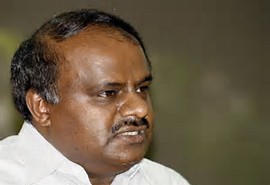 Replying to questions by reporters on Wednesday, he said, “Yeddyurappa has challenged me to release evidence in this regard. I have sufficient proof to show that the cheques were sent. If I release supporting documents, what purpose does it serve? Will Yeddyurappa ask Narendra Modi to take action? Will Yeddyurappa in public admit what action would be taken? I have evidence and have not just jotted down the details in a diary.”

Kumaraswamy had recently stated money used to go from Karnataka to Delhi when the BJP was in power. Yeddyurappa had demanded that the JD (S)leader release the evidence.