I have never worked against my conscience: Venkatesh

Udupi (The Hindu): T. Venkatesh, outgoing Deputy Commissioner, said on Thursday that he had never worked against his conscience in all the departments that he had served, and had followed rules and regulations in the discharge of his duties. He was speaking at a farewell function organised for him at the Zilla Panchayat Hall, here. 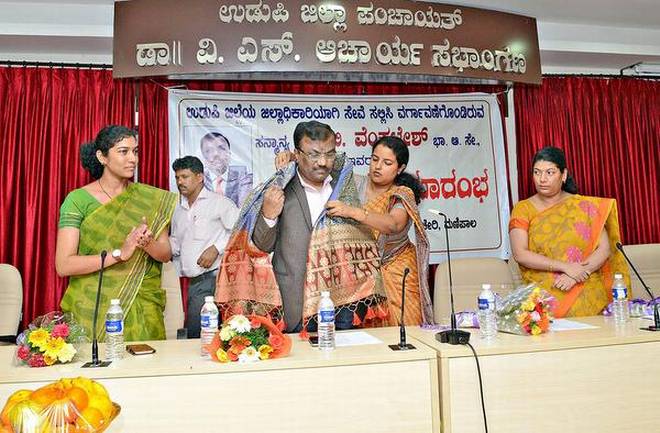 Mr. Venkatesh said that he was surprised when he had been transferred and appointed as Deputy Commissioner of Udupi district six-and-a-half months ago. But before he could completely understand the district, he had been transferred again as Managing Director of Mysuru Sugar Company Ltd. But as Deputy Commissioner, he had disposed of files faster to avoid problems for the common man.

Though there was staff shortage, Udupi district had topped the State in the implementation of the Bhoomi scheme. “I was able to perform well only because of the cooperation of all officers and staff in the district,” Mr. Venkatesh said.

In her felicitation address, Priyanka Mary Francis, Deputy Commissioner, said that Mr. Venkatesh had a deep knowledge about matters relating to the Revenue Department. He worked with equanimity and did not succumb to any pressure. He followed rules and regulations in his decisions. This would be an inspiration to all officers, she said.

G. Anuradha, Additional Deputy Commissioner, said that during his short tenure, Mr. Venkatesh had cleared encroachments on 152 acres of land. He had given his nod in 469 cases of land conversion. Nearly 99 per cent of cases in the District Magistrate’s court had been disposed of.