Kumaraswamy hits back at Siddu, questions his ability to build party

Bengaluru, DHNS: State JD(S) president H?D?Kumaraswamy has said that Chief Minister Siddaramaiah has neither built a political party nor has he the capacity to do so. He has just migrated to the Congress and is enjoying power, Kumaraswamy added. 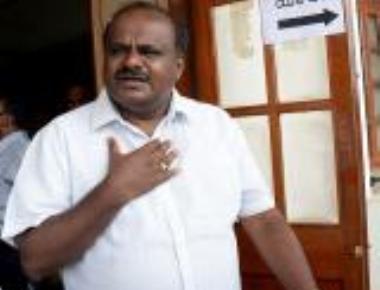 Kumaraswamy was reacting to Siddaramaiah’s statement that the JD(S) would not come to power in the state.

Addressing reporters in Bengaluru on Monday, the JD(S) leader said, “In the 2004 elections, it was our money and effort. Siddaramaiah was upset that his image was not on the banners/posters. His influence was limited to certain constituencies. It was difficult to win even 10 seats when he was the party president. I alone managed to get 40 seats for the party in the 2013 elections.”

Ridiculing Home Minister G Parameshwara, Kumaraswamy said he was a minister in name only. “Parameshwara, who is a Dalit, is being used as a rubber stamp by Siddaramaiah. Parameshwara should resign if he has self-respect,” he added.

Reacting to this, Parameshwara said when Kumaraswamy was the chief minister, he could not even ensure law and order when film actor Rajkumar died. Even the last rites were not held peacefully, he said and asserted that he was well-equipped to handle the Home department