Massive protest in Mangaluru against ban on Kambala

Mangaluru (The Hindu): Residents of coastal Karnataka joined hands with the Dakshina Kannada-Udupi Kambala Samithi to form a human chain in protest against the ban on Kambala, the traditional buffalo slush track race, in Mangaluru on Friday. 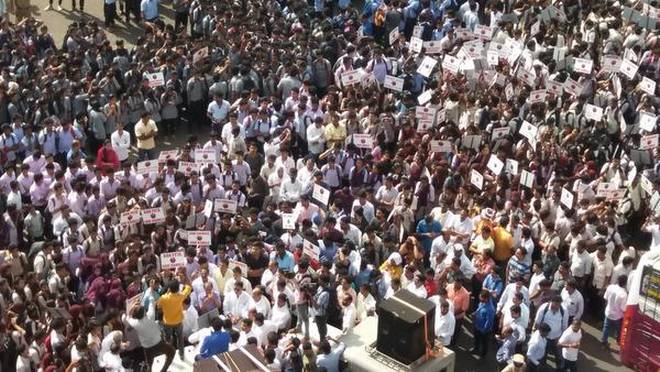 Various leaders who spoke on the occasion made a clear attempt to distinguish between Kambala and Jallikattu, stating that not a single death, either of animal or human being, had occurred during the conduct of Kambala. Kambala does not involve violence and animal rights activists should have understood this before moving the court, Dakshina Kannada MP Nalin Kumar said.

Hundreds of people cutting across political parties, caste and religion gathered in large numbers on the main roads of the city to form the human chain. Responding to the call by the All College Students Union, students left their schools and colleges to participate in the protest. Holding placards in support of Kambala, they chanted “We want Kambala.”

Kambala Samithi president Barkuru Shantharama Shetty said Kambala has been the traditional sport of coastal Karnataka and had a history of over one thousand years. When the Tamil Nadu government can legalise Jallikattu, why can’t the Karnataka government take a similar action, he asked.

Samithi Member Satyajith Surathkal said buffalo owners take special care of the animals. Ban on Kambala should be seen as an attack on culture of the region, he said.

With protesters thronging main roads, vehicular movement in the heart of the city was affected for some time.