Mangaluru (The Hindu): Accusing MP Nalin Kumar Kateel of attempting to disturb peace in the region, Food and Civil Supplies Minister U.T. Khader said on Monday that Mr. Kateel should tender a public apology for his statement on Sunday. 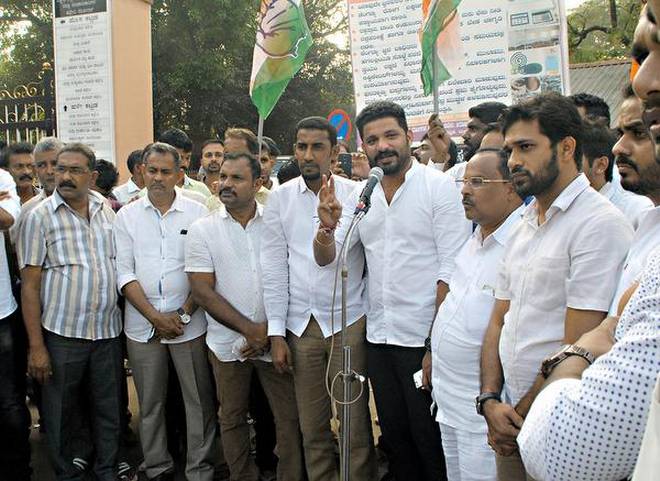 Mr. Kateel, during a protest at Konaje, had stated that the BJP workers are capable of setting the district on fire if the police did not arrest the accused in the murder of Karthik Raj, son of a BJP worker, within 10 days.

In a statement, Mr. Khader, who represents Mangaluru constituency where the murder occurred, said that it was unbecoming of a public representative to speak in a way that could incite violence in the region.

As an MP, Mr. Kateel should work towards the development of the region and not indulge in acts that disturbed peace. Instead of helping the police in catching the real culprits, Mr. Kateel was trying to gain political mileage over the delay in the arrest of those involved in the murder reported in October 2016.

Condemning the statement of Mr. Kateel, district in-charge Minister B. Ramanath Rai said that criminal action should be taken against the MP for making the provocative speech. Mr. Rai said that he has requested the State government to hand over investigation in the murder to the Criminal Investigation Department.

Meanwhile, All India Congress Committee member P.V. Mohan said that Mr. Kateel’s statement was symbolic of the Sangh Parivar’s intention to create unrest in Dakshina Kannada. When the BJP can criticise actor Ramya for her statement on religious intolerance in Dakshina Kannada, what action it was taking against Mr. Kateel who was fuelling unrest in the region, he said in a press release. Congress activists staged protests against Mr. Kateel in front of the Deputy Commissioner’s office here, in Puttur, Sullia and Belthangady and in other parts of the district. Activists of the Democratic Youth Federation of India staged a protest against the MP at Thokkottu.