Udupi (The Hindu): There was mixed response to the Udupi district bandh call given by various organisations to protest against the collection of toll at the toll plazas at Hejmady and Sasthan on National Highway 66 on Monday. They demanded that toll should not be collected till the widening work on the Hejmady-Kundapur stretch of the highway was fully completed. 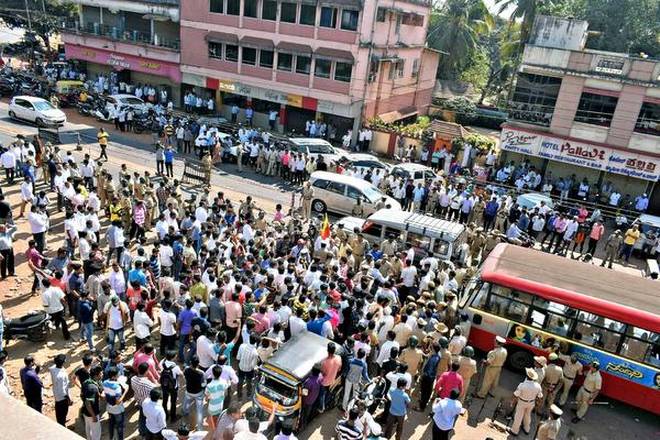 Abhilash, boat owner, was waiting for a bus at the Service Bus Stand here to go to Mangaluru. He wanted to visit the Fisheries Department office in that city. “Since there is no bus service today, I will go on Tuesday,” he said.

There was vociferous protest in Padubidri, where a large number of protesters blocked the highway and demanded that the Deputy Commissioner meet them.

Addressing the protesters, Deviprasad Shetty, president of the Udupi Taluk Gram Panchayat Adhyakshara Okkoota, said that Navayuga Company, which had undertaken the widening work of the national highway on Hejmady-Kundapur stretch, had not completed the construction of service roads at several places. Vehicles with “KA 20” registration numbers should be exempted from paying toll, he said. When the police arrested some protesters and put them on a bus, the others gheraoed the bus. The police then released them. This happened twice as the police were vastly outnumbered by the protesters. Though prohibitory orders are in force in Udupi taluk, this did not deter the protesters.

Finally, Maheshchandra, Udupi Tahsildar, reached the spot and promised the protesters that no toll would be collected from vehicles with “KA 20” registration numbers in a five-kilometre radius of the toll plazas both at Hejmady and Sasthan till February 25. This pacified the protesters who cleared the highway for traffic.