Students of the Dr. T.M.A. Pai Polytechnic here boycotted classes on Monday alleging that a woman lecturer had been sexually harassed by the polytechnic’s vice-principal. 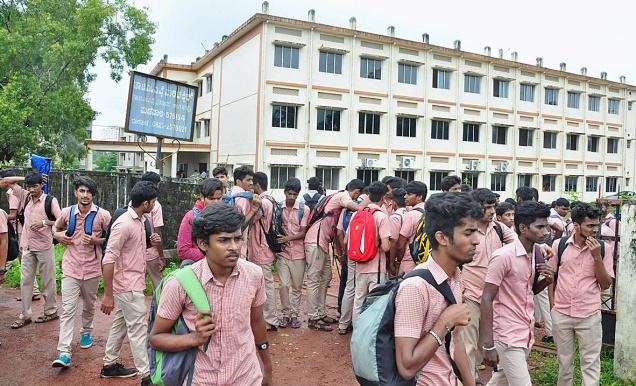 Following the students’ agitation, the management of the polytechnic suspended the vice-principal, Srikanth Pai, pending enquiry.

Meanwhile, the lecturer lodged a complaint at the Women’s Police Station. Earlier, she gave a petition to the police station on August 27.

According to the police, the lecturer, in her complaint, said that when she and Pai were in the staff room, he touched her inappropriately on August 27. She then came out shouting from the room but was followed by Pai, who, in turn, shouted back at her and threatened her. She also said in her complaint that Pai was stalking her, sending her inappropriate messages over her mobile phone and been threatening her for some months.

The police said that a case has been registered under Sections 354A (sexual harassment), 354D (stalking) and 506 (criminal intimidation) of Indian Penal Code at the Women’s Police Station against Pai and that investigation is on.

Meanwhile, agitated students gathered in large numbers at the polytechnic and demanded that Pai be immediately dismissed.

Prajwal D. Shetty, president of All College Polytechnic Students Union, alleged that there were two previous incidents of such harassment in which Pai was involved. But the polytechnic had not taken any action against him. The students will boycott classes until Pai was dismissed from service, he said.

Amruta, a student, said that the students did not want Pai to continue, after this incident. “He should be dismissed,” she said.

Polytechnic’s response
Meanwhile, T. Ranga Pai, academic coordinator of the polytechnic, said that the charge of the students that there were two previous incidents of harassment in which Pai was involved did not hold water. The polytechnic had a committee to look into complaints of sexual harassment for the last two years as per the Vishaka guidelines. But no complaints had come to it.

“The committee will look into the present complaint. Pai is a permanent employee. He could not be dismissed without a probe. He has been suspended pending enquiry. Further action would be taken after the committee probed into the matter, within a week,” he said.