Mangaluru (The Hindu): Nalin Kumar Kateel, MP, and other activists carried out a symbolic hunger strike against the State government for going ahead with the Yettinahole Diversion Project. 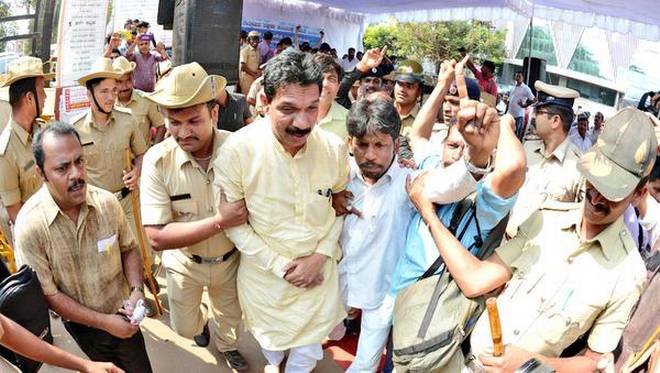 This is in contrary to the announcement on February 6, when activists Satyajit Surathkal and M.G. Hegde said that they and Mr. Kateel and other activists of the Netravathi Rakshana Samyukta Samiti will begin an indefinite hunger strike on Friday.

They had said that members of other organisations will be on a relay hunger strike.

On Friday morning, Mr. Kateel and other activists garlanded the statue of Mahatma Gandhi and sat on strike near the office of the Deputy Commissioner at 10 a.m.

Addressing people around 2.30 p.m., Monappa Bhandary, former MLC, said the city police, under directions the State Government, had denied permission for the indefinite hunger strike. As they are permitted to hold protest till 2 p.m., Mr. Bhandary said they would voluntarily court arrest.

Mr. Bhandary said they would call for a bandh in the district on the day of the State Budget. They would intensify their protest if the people’s concerns, regarding the project, are not heard, he said. The police arrested Mr. Kateel and other activists and later released them.