Confusion over redeployment of teachers at counselling centre

Mangaluru (The Hindu): Confusion prevailed for some time as some teachers and members of some School Development Committees (SDMCs) objected to redeployment of teachers of government lower and higher primary schools in Udupi district, on the Board High School premises here on Tuesday. 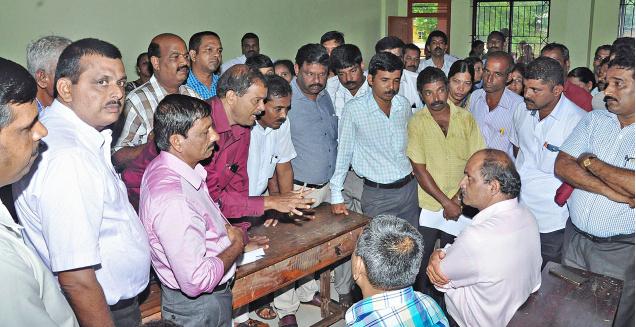 The Department of Public Instruction was holding counselling for redeploying teachers as per norms of Right to Education (RTE) Act at the Board High School.

Nagabhushan Shet, president of Volakadu Government School, Udupi, said that the school had 607 students. The school was providing both Kannada and English medium education and good facilities to the students. If six teachers from the school are redeployed or transferred, it would affect the education of the students in the school. “By reckless redeployment, the officers are encouraging private schools,” he said.

Annappa Shetty, president of Government Lower Primary School, Hosamatha, Kundapur taluk, said that there were 32 students in the school and three teachers. But if during redeployment, one teacher was transferred, it would affect the education of the students coming from Asodu, Kedoor, Hosamatha and surrounding villages. “By such redeployment of teachers, the authorities are killing Kannada-medium schools,” he said.

Meanwhile, Diwaker Shetty, Deputy Director of Public Instruction (DDPI), said that some teachers were upset by the redeployment and even threatened to go on strike. However, the department had convinced them of the necessity for the move.

There were more teachers in densely populated areas and the coastal belt in the district, while the number of teachers in the ghat region and remote areas was less. This imbalance had to be corrected.

As many as 220 teachers were redeployed during counselling on Tuesday benefiting 122 schools.

The redeployment of 36 teachers of Brahmavar and Udupi blocks would be decided on July 21. Efforts were made to redeploy teachers within the same education block. “However, seven teachers in Byndoor block will suffer as the schools are located in remote areas within the same block,” Mr. Shetty said.

Meanwhile, protests were held in Puttur and Nelyadi in Bantwal against the transfer of additional teachers in government higher primary schools to those with fewer teachers.

Every Deputy Director of Public Instruction has been directed to maintain the ratio of one teacher for 10 or less students and two teachers for students numbering between 11 and 60. There are 25 government primary schools in Dakshina Kannada where the number of students was 10 or less.

On Tuesday, parents and some teachers staged a protest against the process of transferring additional teachers.

Parents said that this process, which is being initiated after the start of the academic year, will hamper studies. Block Education Officers in Puttur and Bantwal told the protesters that they are taking action as per the orders of the State government.