Bengaluru, Feb. 15: Archbishop Peter Machado of Bangalore urged the Catholic journalists to speak for God and stand by truth while felicitating them at Archbishop’s House on February 14. He said “you are ours; you are our eyes, ears and even heartbeat.” Stressing the importance of media, the prelate said the Christian media or Christian journalists are not only the carriers of messages but they also convey the matter truthfully and without bias.

Archbishop Machado who has initiated a number of spiritual and developmental activities in the archdiocese exhorted the media people to keep their religion intact unlike politicians change their parties. He added saying that they (journalists) are not expected to be always ‘holy, holy.’ While they speak for the Church as the fact is that my mother is my mother, they should speak for themselves, their own convictions, their own original ideals. “Do not feel inferiority complex when it comes to your own matters for which you stand.”

A man of few words, Archbishop Machado who is full of action exhorted the press people to speak for those cannot speak for themselves and to take up issues of human rights. The root of all human rights is God Himself, he observed. Whatever the archdiocese carries out for the poor is not done for publicity and often the outside world is not informed using the media. However, one should look at the poor and not to ignore the real situation they are in.

The archdiocese constructed 40 houses in Kodagu during the floods in 2018, costing a few crores. The government finally did not part with the land as promised. The houses were constructed not only for the Catholics but for all. The diocese of Mysore donated four acres of land. Politics gets the upper hand everywhere and in everything. The duty of the journalists is to create awareness as corruption has crept in every system, strata and echelons of the society, albeit Christians are considered people who can think and do better.

Being president of the Karnataka United Christian Forum for Human Rights (KUCFHR), Most Rev Machado initiated a number of dialogues with various sections and groups. As part of the programme, he visited Iskcon Temple in the city recently and met the authorities. It is not always possible to meet the MPs and MLs of different parties but it may be good to meet the bureaucrats and officials to address the issues we face. For the first time after the recent Panchayat elections, four Christians have become presidents and 14 have become Panchayat members.

The Archbishop who is also president of Karnataka Catholic Bishops’ Council informed them of the forthcoming Corporation elections in the State. He did not speak for any one party; instead he encouraged Christians to come up even in politics. Earlier bishop of Belgaum for 12 years, he spoke of the corruption at different departments and levels with incidents and facts.

Dr Machado appointed as archbishop of Bangalore on March 19, 2018 said ‘I have begun to love the city (Bangalore)’ and called upon all present to love the city to solve the problems people face. Delhi got what it wanted and solved its problems and we need to think of doing it here too. Installed as Archbishop on May 31, 2018, the prelate has touched a number of issues that the Christians face including getting employment in government sectors.

He informed the journalists about the Vedic Academy begun by Benedictine Fathers at Kengeri to provide coaching for IAS candidates. It is open to all and online courses are also available.

The archdiocese has planned to start a health clinic in KGF, which, though known as the Bethlehem of the archdiocese, is the third poorest district in India. Survival has become difficult for anyone there. Due to the prevailing situation, doctors have migrated to Bangalore. Among other issues people face include exorbitant rent for rooms; people die at 40 and 50 years of age. Any one falling sick even in emergency cases are not admitted in hospitals after 6 pm. The eight-crore project will have two doctors and as many nurses to begin with, the Archbishop added.

The archdiocese has 21 commissions to look after various needs of the faithful. The Archdiocesan Communication Centre has initiated a studio as part of its media centre and a full-fledged one is in the pipeline.

Ealrier, Kanthraj, PRO introduced the topic and elucidated the purpose of the meet. He welcomed all before each one made self-introduction on their journalistic background and present engagement. Kanthraj also proposed a vote thanks to conclude the meet. 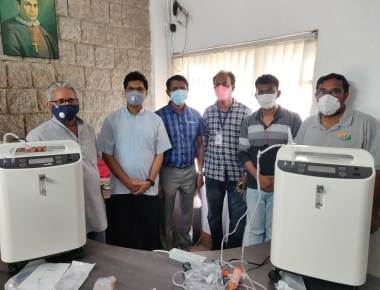