Udupi, (The Hindu): Raghupati Bhat, MLA and Bharatiya Janata Party (BJP) leader, said on Wednesday that the Maraligagi Horata Samiti will intensify its agitation in the district if all 171 previous permit holders were not given permits for sand extraction by the district administration. 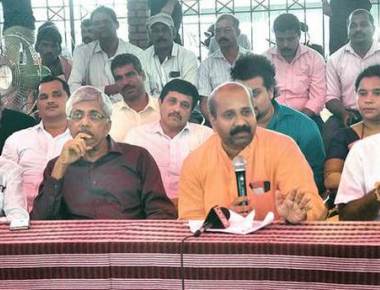 Addressing presspersons here, Mr. Bhat said that the indefinite dharna against both the district administration and the State government, which entered the seventh day on Wednesday, would continue till it was resolved to the satisfaction of the samiti. If the matter was not resolved by November 10, then the samiti would call for an Udupi district bandh on November 10.

After the bandh, the samiti will launch an indefinite strike where the construction sector would stop all activities in the district. Various organizations in the samiti had agreed that they would not accept the permits being provided by the administration to 92 permit holders.

The State government had stated that it was seeking clarifications from the Union Ministry of Environment and Forests on this issue.

Mr. Bhat said that he objected to Chief Minister H.D. Kumaraswamy’s statement that only Union government’s policies were responsible for sand extraction problem. The samiti would explain the problem to the district administration, State and Union governments, he said.