Mangaluru (The Hindu): The festival will begin on Dieppe beach on September 9. It is not just their uniquely designed kites and their art, artists from Team Mangalore will express their concerns about the harm being cause to the eco-sensitive Western Ghats at the 10-day long International Kite Festival in Dieppe, France. 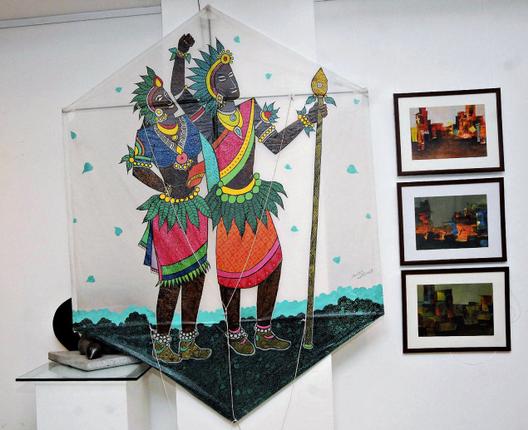 This is the seventh year that artists Dinesh Holla and Satish Rao from Team Mangalore will be participating in this biennial kite festival which has drawn teams from 48 countries.

The festival will be held on Dieppe beach off the English Channel between September 9 and 18.

Mr. Holla and Mr. Rao told reporters here on Friday that they have planned to meet members from other nations and apprise them of the Yettinahole diversion project that is being executed very close to the Pushpagiri Wildlife Sanctuary, which is a World Heritage site.

They have planned to submit a memorandum signed by members of kite flying teams to UNESCO and urge it protect the Western Ghats.

Two new ones
Similar to what they did in the earlier festivals, Mr. Holla and Mr. Rao have designed two new kites for this year’s event. One is an 18-foot-long and 12-foot-wide Dampati (couple) kite that shows a couple in a native costume with male sporting the “Mysuru Peta” (head gear) and the female a traditional sari and the other is a six-foot-wide “Aadivasi” in line drawing showing two tribal people enjoying kite flying. These two kites will be among the 10 kites that Team Mangalore will fly in the event.

Like last year, Mr. Holla has designed the poster of the Dieppe Kite Festival this year too. The poster made of line art shows art forms of Dieppe and India. At Dieppe, Mr. Holla will do a painting of “Indian Tribal” on a 36-metre-long canvas to mark the 36 year of the kite festival.

The proceeds of the sale of this painting will be used for tribal welfare, he said. Mr. Holla will hold an exhibition of his paintings at Dieppe.

Mr. Holla and Mr. Rao will be leaving here for Dieppe on September 6.